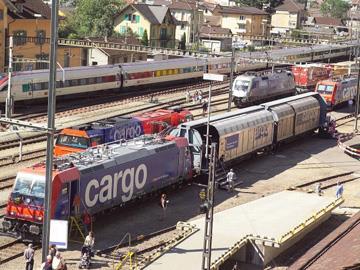 SWITZERLAND: DB Schenker Rail's transit freight over the Gotthard route will be handled by SBB Cargo rather than BLS Cargo with effect from the December timetable change, BLS Cargo announced on April 2.

The move follows the failure of negotiations between DB Schenker Rail and BLS Cargo over the last few months, with the Swiss partner unable to agree a price that left it with a profit. BLS Cargo blamed a general fall in prices for freight traffic, 'a disproportionate increase in access charges on the Gotthard route' and the unfavourable rate of exchange between the Swiss franc and the euro. BLS Cargo will withdraw around 10 pairs of trains a day, although it hopes to obtain new traffic from other sources.

DB holds 45% of BLS Cargo's share capital through its DB Schweiz Holding subsidiary, and the failure to reach agreement over Gotthard freight traffic calls this arrangement into question. BLS Cargo affirmed in a statement that both sides would 're-evaluate their co-operation' over the coming months.