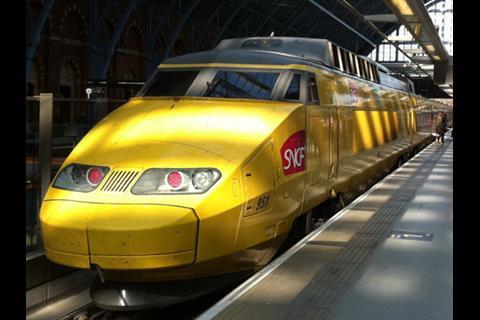 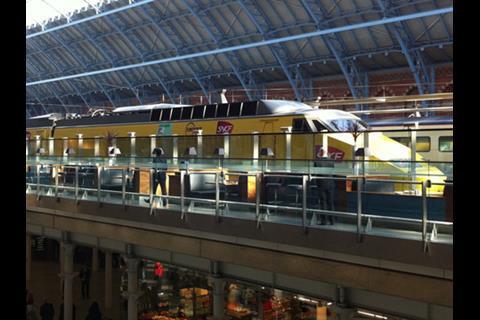 EUROPE: The vision of a network of high speed freight trains carrying express parcels and other premium consignments across Europe moved a step closer on March 21, when a demonstration train from Lyon Saint-Exupéry and Paris Charles-de-Gaulle airports arrived at London's St Pancras International station.

The trial run was organised by members of the EuroCarex consortium, which includes SNCF, Eurotunnel, Air France, the French post office La Poste, FedEx and airport operators in Paris, Amsterdam, Liège and Lyon. The UK element was co-ordinated by Eurotunnel subsidiary GB Railfreight and High Speed 1 Ltd, which holds the concession to operate the high speed line between London and the Channel Tunnel. Loading and unloading was handled by SNCF Geodis subsidiary Geoparts Rail Solutions.

The aim is to start commercial services in 2017, with a London terminal probably located near Barking. Discussions are underway with Alstom and Siemens for a fleet of 25 trainsets.

Operations would start with premium express traffic, but the consortium envisages that it could be expanded to handle more traditional freight in future.

The original Cargo Rail Express project was launched in 2006, following a UIC-led study into the European express freight market. In 2008 the reformed EuroCarex consortium signed a memorandum of agreement aiming to start commercial services in March 2012, and opened negotiations to acquire an initial fleet of eight dedicated high speed freight trains at a cost of €625m. These were to be designed to carry modular loads similar to airfreight containers, but the project was delayed by the economic downturn.

In the absence of dedicated rolling stock, the demonstration run to London was operated by set 951, one of the three dedicated TGV trainsets which La Poste has been using to carry mail between Paris, Mâcon and Cavaillon since 1984. This has a capacity for 120 tonnes of parcels, equivalent to seven articulated lorries or seven Boeing 737 aircraft.

The train left Lyon Saint-Exupéry at 16.42 on March 20, arriving at St Pancras the next morning following a stop to load extra cargo at Roissy-Charles-de-Gaulle.

Greeting the arrival of the train in London, French MP and EuroCarex Chairman Yanick Paternotte said 'I am delighted that today's test over the European high speed rail network clearly shows the interest which strategic players in the logistics field - airports as well as rail operators - have in linking their infrastructures to key European economic centres.'

EuroCarex believes that its Express Rail network of high speed freight trains could provide next-day delivery between European hubs with a carbon footprint lower than the current mix of air and road, offering a viable alternative to rising fuel prices and the environmental constraints which limit the number of night flights.