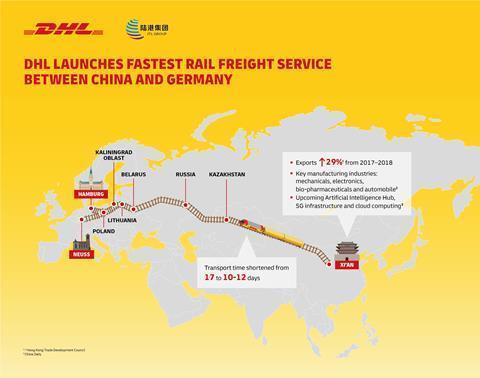 INTERNATIONAL: DHL is looking at further reductions in transit times between China and Europe, following the success of a service between Xi’an in China and Hamburg and Neuss in Germany which was launched in November.

‘With our partners in this project, China Railway, UTLC ERA and Belintertrans, it is conceivable that we can reduce the length of a China – western Europe station-to-station trip to within 10 days in the future’, Zafer Engin, Head of Value Added Services at DHL Global Forwarding China told Railway Gazette International. ‘We are also aiming to expand cargo shipments to include high value items and e-commerce goods.’

The Xi’an – Germany express service has been well received, with DHL looking to increase the frequency from every two weeks to weekly.

It uses a 9 400 km route through Kazakhstan, Russia, Belarus, Lithuania and Russia’s Kaliningrad exclave, with shipments entering the EU near Braniewo in Poland to avoid delays at other border crossings.

‘Along with the demand that we have seen since the launch of this service, we have started to develop it further by increasing the capacity and adding new hubs, including Budapest and Milano at the end of 2019’, said Engin. Other routes and services are ‘currently under development’, he added.

Part of the attraction of the service is its transit time of 10 to 12 days, down from the more usual 15-plus days.

‘Speed is achieved using an alternative route, and with the support of our partners in this project’, said Engin. ‘We also use our own GPS tracking system to monitor operational progress and maximise movement speed.’