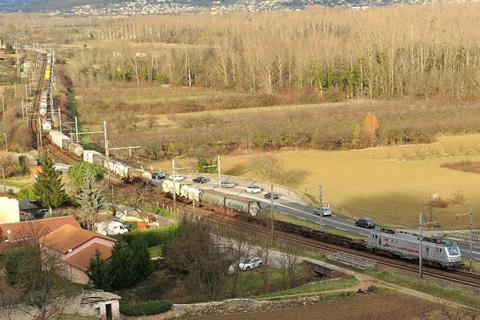 FRANCE: Proposals to relaunch rail freight in France are to be published in June, under plans now being developed by an alliance of cargo operators.

The 4F alliance is calling on the government to support plans for industry and shippers to make better use of rail freight services, in line with commitments made in the Loi d’Orientation des Mobilités promulgated on December 24 2019. The revised transport legislation calls for the government to define ‘a strategy to develop rail freight’ which must be presented to parliament by January 1 2021. Among the specific issues it must address are methods to facilitate modal transfer, ways to give rail a bigger role in logistics and supply chains serving towns and cities, and measures to strengthen the rail infrastructure serving ports.

The main objective of the 4F alliance is to double rail’s share of the freight market in France from just 9% at present to 18% by 2030. Aware that several attempts to revitalise domestic rail freight over the last two decades have not halted the decline in market share, the alliance is modelling itself on the pan-European Rail Freight Forward movement which aims to double market share across Europe to 30% by 2030. According to one operator, the difference with 4F now is that ‘everyone is working together’.

Franck Tufferau, Executive Officer of the Association Française du Rail, a grouping of private freight operators in France, told L’Antenne that ‘we want to unite under the same banner to participate in and be proactively involved in the relaunch of rail in France … the sector has ideas and is very motivated’. AFRA envisages that the proposals to be put to the government in June would include requests for high-quality paths for freight trains as well as investment estimated at ‘several hundred million euros’.

Meanwhile, in light of the Covid-19 crisis, AFRA has called on the government ‘to declare rail freight to be of vital interest’ as it carries large flows of fuel, cereals, refrigerated goods and other commodities. ‘In the crisis we are living through, rail freight activity is of strategic interest to avoid a breakdown in the industrial supply chain’, said the President of AFRA’s freight committee Pascal Sainson. ‘The government should not delay the adoption of concrete protection measures to ensure the survival of rail freight businesses.’