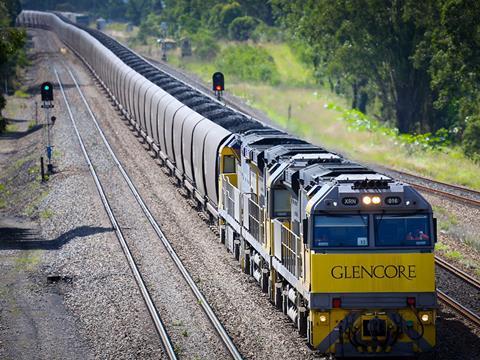 The transaction is expected to close on December 1, subject to approval from the Australian Foreign Investment Review Board.

Originally established in 2010 by Xstrata, GRail is now Australia’s third largest coal haulage business with traffic of 40 mtpa. Operations are managed by Freightliner Australia, which G&W acquired in March 2015.

Glencore is to award GWA a 20-year exclusive contract to haul all coal produced at its existing mines in the Hunter Valley to the Port of Newcastle, with guaranteed minimum volumes for the first 18 years. Track access fees will continue to be paid directly by Glencore.

G&W said the coal operations would complement its intermodal, agricultural and mining businesses in South Australia and Northern Territory. ‘We are effectively doubling the size of GWA and retaining 51% of a business with stronger long-term free cash flow and a significant portion of GWA’s rail shipments under long-term take-or-pay contracts’, said G&W President & CEO Jack Hellmann.

To create the A$2bn enterprise value partnership, G&W and MIRA are contributing a combined A$1·3bn in cash, shareholder loans and contributed equity, and GWA is entering into a five-year A$690m senior secured term loan facility that is non-recourse to G&W and MIRA. The proceeds will be used to acquire GRail for A$1·14bn, repay GWA’s existing A$250m term loan under G&W’s credit facility and pay A$32m of transaction costs.