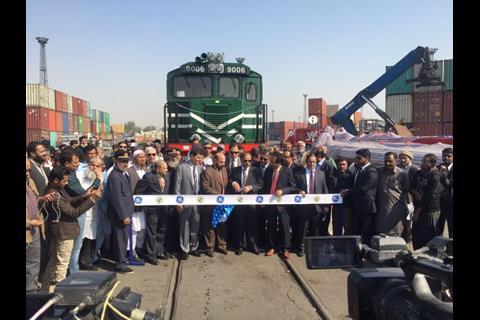 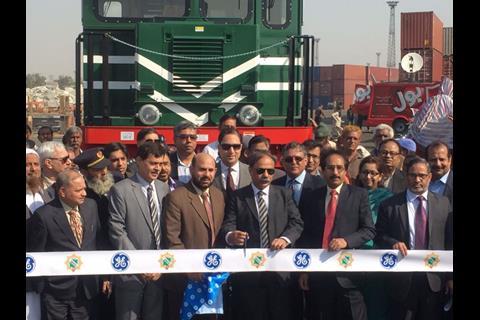 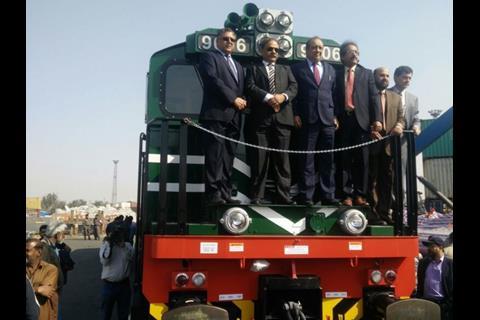 PAKISTAN: More than 200 VIPs and guests gathered in the port of Karachi on January 23 to mark the arrival of the first seven of 55 Evolution Series ES43ACi diesel locomotives being built for Pakistan Railways by GE Transportation.

Being supplied under a 10-year agreement valued at US$400m, locomotives built at Eire in the USA are a key element in the government’s Vision 2025 programme to improve regional connectivity. This is expected to increase rail’s market share from 4% to around 20%, reducing the cost and environmental impact of freight transport. Pakistan Railways Chief Executive Officer Javed Anwer Bubak said ‘strengthening the transport and logistics infrastructure is crucial to support Pakistan’s economy’.

Designated Class GEU-40 by PR, the 1 676 mm gauge locomotives are designed to operate in harsh conditions. Powered by a 12-cylinder 4 563 hp GEVO12 engine, and fitted with an 8 000 litre fuel tank, the 137 tonne six-axle units have a maximum speed of 120 km/h. They are expected to haul trains of up to 40 high-capacity wagons grossing 3 400 tonnes.

The first seven locomotives will primarily be used to haul coal from Karachi’s Port Qasim to a Chinese-built 1 320 MW power station at Sahiwal, which is expected to open later this year. PR expects to operate an average of five trains per day, carrying a total of 12 000 tonnes. According to Bubak, this would generate ‘substantial revenues’ of up to Rs13bn per year.

‘GE has been a committed partner to Pakistan Railways for more than 35 years’ said Sarim Sheikh, President & CEO of GE Pakistan. ‘These new locomotives will provide better fuel efficiency and longer overhaul cycles than other units in Pakistan today, substantially reducing the costs of transporting essential freight.’ The remaining locomotives are expected to be delivered during this year.