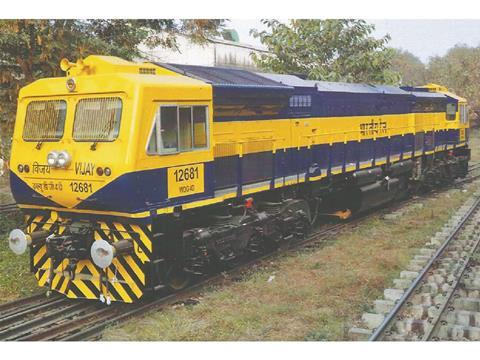 State-owned Coal India Ltd is expected to increase annual production from 494 million tonnes to 1 billion tonnes by 2020, in order to reduce dependence on imported fuel. Swarup said 28 mines would open this year, but progress is dependent on having sufficient rail capacity to move the output to consumers, in particular power stations and steel plants.

According to the ministry, around 200 trainsets are currently being used to move coal on the IR network, and a similar number will be ordered over the next three years. 'We have already placed orders for 34', Swarup told the local Chamber of Commerce & Industry, adding that CIL had around Rs530bn available for investment.

On May 28 IR Board Member (Traffic) Ajay Shukla said CIL had agreed to invest Rs500m to fund extra wagons for use on coal flows from Odisha and Chhattisgarh. He explained that coal accounted for around 47% of IR's freight revenues, but throughput was hampered by a shortage of rolling stock and track capacity.

The Coal Ministry plans to take direct responsibility for building new railways to serve the coalfields, and has already established two joint ventures with the state governments of Odhisha and Jharkhand to progress selected projects. On May 4 CIL subsidiary Central Coalfields Ltd signed a memorandum of understanding in Ranchi with the Jharkhand government and the Ministry of Railways to establish a joint venture to develop new railways and private sidings in the North Karanpura coalfield. This will have an equity capital of Rs10bn, with the Coal Ministry holding 64%, the Ministry of Railways 26% and the state government 10%.

Minister of State for Coal & Power Piyush Goyal said the joint venture would prioritise the 44 km Tori - Shivpur and 48 km Shivpur - Kathotia lines which are expected to carry 200 million tonnes of coal a year to power stations supplying 40 GW to the east of the country. Similar joint ventures projects in Chattisgarh and Odisha would serve the north and west.