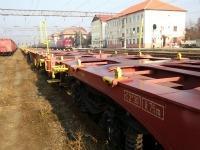 ROMANIA: Contract logistics provider Tibbett Logistics has taken delivery of its first 32 intermodal wagons from leasing company Touax, to be deployed on block trains operating from the port of Constanta. Tibbett is looking to acquire more vehicles early in 2012, in order to provide a daily service and introduce a new route between Bucuresti and western Romania.

‘The availability of rail wagons on the Romanian market has decreased due to the age and general poor state of repair of the rolling stock’, said Tibbett Logistics CEO David Goldsborough on November 30. ‘For this reason, we have taken the unusual step of long-term leasing our own rail wagons so that our ability to offer regular and uninterrupted services to customers is not compromised.’

Ahead of an official opening ceremony next week, the first trains have been received by Tibbett Logistics’ second terminal in Bucuresti, located at Europolis Park in the west of the Romanian capital. The company reports that construction is ‘ahead of plan’ on Phase 2 of the development, which will provide an additional 150 m of track and more container storage space.