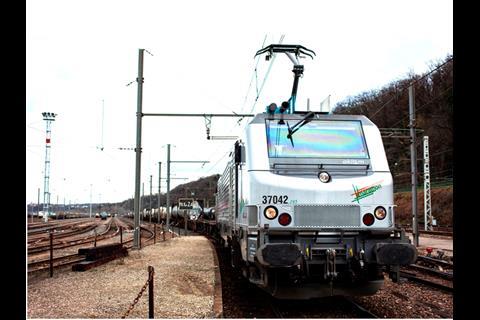 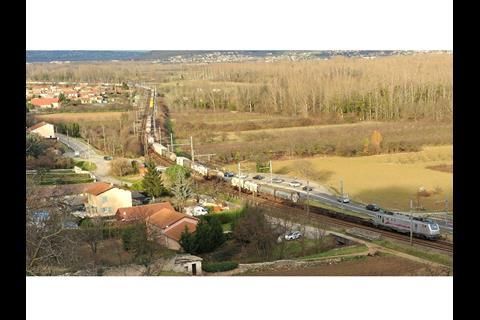 EUROPE: Fret SNCF, Kombiverkehr and RFF ran their first 1·5 km long freight train between Sibelin yard near Lyon and Nîmes on January 18, marking the start of the demonstration phase of the Project Marathon research programme.

Three of Kombiverkehr’s regular intermodal trains between Germany and Spain were reformed as a pair of 750 m long trains, which were in turn coupled together as a single 70-wagon consist with a maximum trailing load of 4 000 tonnes.

The train was hauled by a pair of Alstom-built Class 37000 Bo-Bo electric locos, with one at the front, and the second in the middle controlled remotely using distributed power technology. The locos were provided by SNCF’s leasing subsidiary Akiem, but in future the project partners intend to test diesel operation using a pair of Euro4000s from Vossloh España.

Partially funded by an FP7 research grant from the EU, Project Marathon was launched in April 2011 and is due to run for three years. Building on earlier work by the New Opera programme, the aim is to reduce operating costs by 30% and increase the capacity of key freight corridors. The promoters believe that it should be possible to run five long trains in the paths needed for six conventional freight trains.

The project partners hope to validate the technical feasibility of long train operation in a European context, so that it can be rolled out for commercial applications by 2016. Little investment would be required other than installing the remote control equipment on sufficient locomotives and lengthening some freight loops to take the longer trains.

‘We want to strengthen the competitiveness of rail freight and make it more attractive for French and European shippers’, explained Fret SNCF Director Sylvie Charles. ‘We are working with RFF toward commercial operation, and we hope that these double trains will be running on major European freight corridors within two years.’