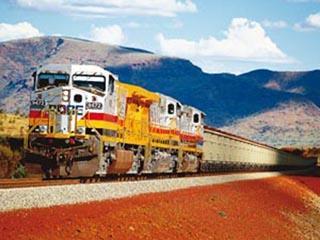 AUSTRALIA: Train operations on Rio Tinto’s heavy haul iron ore railways in the Pilbara are to be fully automated by 2015 under two contracts announced on July 6. Valued at A$362m in total, the contracts have been exercised under the framework agreement which Rio Tinto signed with Ansaldo STS in 2010.

Forming a key part of Rio Tinto's AutoHaul project, the larger contract worth A$317·5m covers the development and delivery of an automated train management system for the 1 500 km network. Ansaldo STS says the first large-scale deployment of driverless heavy haul trains in the world will provide a significant enhancement in ‘flexibility and capacity’.

Ansaldo STS is to develop a modular signalling system including a centralised Vital Safety Server to manage train movements plus onboard ‘driving modules’ for the locomotives which will enable fully automatic operation. The conversion will re-use all existing lineside infrastructure, and is to be deployed with no disruption to train operations.

The second contract, worth A$44·7m, covers modifications to the locomotive fleet to enable the introduction of Electronically Controlled Pneumatic braking, as the next in a series of staged upgrades to boost capacity and efficiency. Ansaldo STS will also provide systems integration to support the installation of ECP braking across Rio Tinto’s entire rolling stock fleet, bringing significant improvements in the handling of heavy ore trains as part of the transition to full automation.