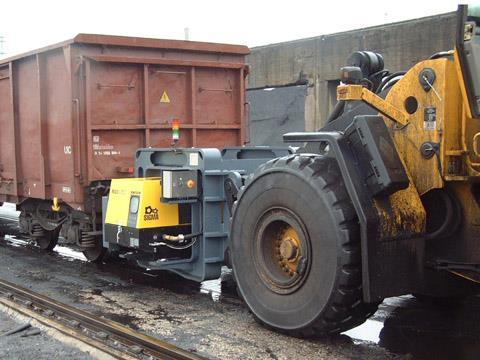 EUROPE: The movement of wagons around industrial premises and private sidings has been simplified by the development of the RVK shunting adaptor for use with a conventional front-end loader.

The RVK has been developed by Austrian engineering group Fiegl Maschinenbau for use at a local steelworks. The steel company had been moving rakes of up to 20 wagons grossing 2000 tonnes through the ore unloading area by ‘nudging’ the vehicles with a rubber-tyred Volvo F180 loader, rather than summoning a shunting loco from elsewhere on the site’s extensive internal rail network. However, the movement of unbraked wagons was subsequently banned on safety grounds.

The RVK adaptor allows the loader to be securely coupled to the train and to operate its brakes. It incorporates quick-release fittings to attach to the loader in place of the normal shovel blade, allowing it to be picked up and set down rapidly when needed.

The adaptor has a Wabco autocoupler for connecting to the wagons, plus a Kaeser compressor and air reservoir to supply the train brakes. These are controlled remotely using a hand-held radio pack which features a deadman control and an emergency stop button.

Having been certified for use in Austria, the prototype RVK has now been used successfully for a year, and Fiegl is now looking to make it available for other private siding operators across Europe.