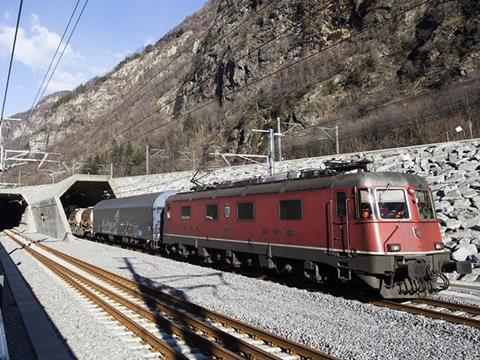 At a press conference on April 7 in Basel at which both organisations pledged support for the planned Gateway Basel Nord freight terminal, SBB CEO Andreas Meyer, SBB Cargo Director Nicolas Perrin and Astag President Adrian Amstutz published a joint position paper outlining how these objectives could be achieved.

Noting that the government is projecting a 45% increase in tonne-km on the rail network and a 33% rise on the road network by 2040 compared with 2010, SBB and Astag insisted that the present freight transport infrastructure was no longer adequate, with all modes affected by ‘massive bottlenecks’. Changes in the freight market meant that today’s customers require and expect on-demand services with smart delivery chains and real-time information, placing greater demands on transport operators.

SBB Cargo had introduced regular-interval services from the December 2016 timetable change as part of its drive to become financially independent. In the pipeline were ‘intelligent’ wagons, ‘automation of the last mile’ and the simplification and automation of various processes.

SBB and Astag called for more ‘co-modality’ where each transport mode would play to its strengths. Competitive thinking from an ideological point of view was no longer appropriate, they said, although rail transport should remain the main option for north-south transit traffic, in line with federal policy.

Intermodal traffic was the fastest growing sector, and more terminal capacity such as the Gateway Basel Nord project was badly needed. Three lanes in each direction should be available throughout on the A1 motorway between Lausanne and Winterthur, and more rest stops should be available for lorry drivers on main roads and in built-up areas. Rapid construction of the second Gotthard motorway tunnel was also required.

Better freight paths were needed on the national rail network, with fair pricing and the development of an ‘express network’ between economically important centres.

The two organisations drew attention to the lower wages and conditions permitted by hauliers based in eastern Europe which threatened to disadvantage Swiss businesses through ‘social dumping’. They called for a continued ban on cabotage with strict monitoring and clear responsibilities allocated between the Federal Transport Office, customs and border control bodies and the police — a central office for cabotage related matters would help to ensure that rules were respected.

SBB and Astag believed that a fresh approach built on a stronger national freight transport and logistics sector was essential to support the Swiss economy.