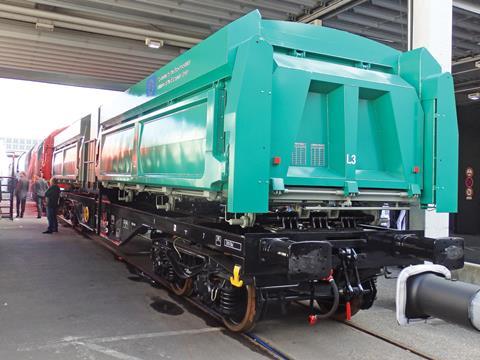 CROATIA: A self-propelled wagon fitted with a 55 kW diesel generator and hydraulic transmission giving it the ability to move around worksites at up to 100 km/h under remote control has been developed by RZV Čakovec and partners.

The prototype has two ballast hoppers which can be hydraulically tipped in three directions, with lineside staff using a remote control handset. The tare weight is 37·3 tonnes, with a payload of 52·7 tonnes or volume of 50 m3. Knorr-Bremse brakes are fitted.

The intention is that a locomotive would haul ballast wagons to a worksite, then uncouple and return to base. The self-propelled wagons would be able to move around the site and to nearby worksites under their own power, eliminating the need for the inefficient use of a large locomotive for low-speed short-distance movements. The wagons could also be used for general freight at docks and terminals, with a range of around 1 km. It is not envisaged that the self-propelled wagon would act as a locomotive in in own right to shunt conventional unpowered vehicles.

Development has been supported by the EU's Eco-Innovation Programme, which met half of the €889 386 cost. Participants in the project included Croatian rolling stock manufacturer RZV Čakovec, the University of Zagreb which undertook lifecycle studies, Superna which provided technical support and administration, Institut Kirilo Savi which was responsible for certification and Altius which provided marketing services.