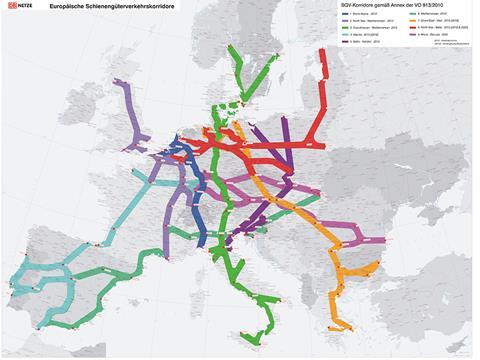 EUROPE: The Scandinavian–Mediterranean, Baltic–Adriatic and North Sea–Baltic rail freight corridors were officially launched on November 10. They join six which have been operations since November 2013, completing the EU’s European Rail Network for Competitive Freight.

Set up under Regulation 913/2010, the RFCs are a European Commission initiative intended to foster cross-border co-operation between member states and infrastructure managers. The aim is to provide co-ordinated capacity planning, traffic and infrastructure management as well as ‘one-stop-shop’ contact points for train operators. The European Commission is providing co-funding through the Connecting Europe Facility.

‘I would like to congratulate all member states, rail infrastructure managers and stakeholders who have been involved in the establishment of these three Rail Freight Corridors’, said European Commissioner for Transport Violeta Bulc. ‘It is an achievement which strengthens the competitiveness of rail on the European freight transport market. The Rail Freight Corridors will now enter into a new phase, which requires ambitious developments in terms of quality of service, capacity and standards. Rules and procedures must be harmonised and the corridors must develop as a network, focused on market and customer needs.’