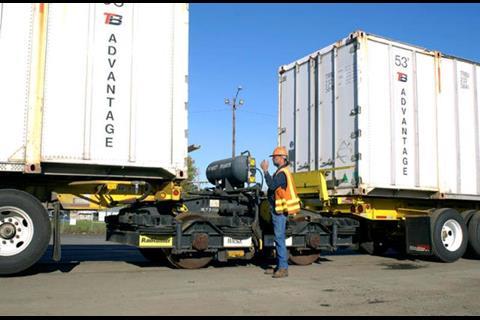 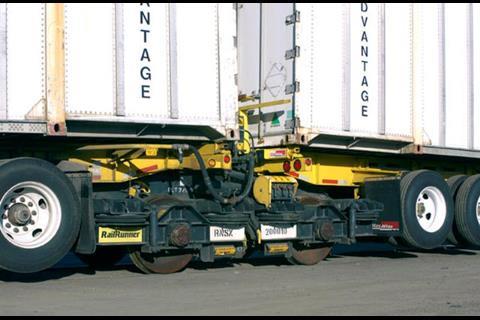 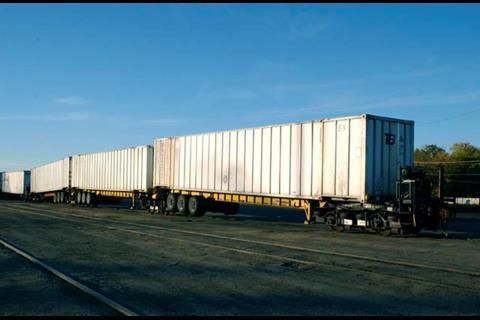 SOUTH AFRICA: RailRunner of the USA announced on September 20 that its local subsidiary had signed a 20-year agreement with Transnet to put its semi-trailers capable of operating on both road and rail into service on the South African network. RailRunner services between Cape Town and Gauteng are due to begin in 2018.

RailRunner says that its system eliminates the need for expensive cranes and other equipment in a traditional intermodal hub. Its trailers riding on shared bogies can be hauled by a conventional locomotive, and are able to carry standard maritime containers.

According to the manufacturer, the design of the trailer allows between 20% and 40% more payload to be carried for a given length of train. The weight saving compared with a conventional flat wagon lowers energy consumption as well as CO2 emissions.

Transnet and RailRunner South Africa are forming a joint venture to implement the new technology, ‘providing a door-to-door transportation system spanning road and rail’. An RRSA subsidiary trading as RNS has been authorised to provide local network services through Transnet.

According to RailRunner, the value of the contract is US$400m, including service revenue and equipment sales by licensed third parties.

‘RailRunner technology is a perfect match for the challenges – and opportunities – Transnet faces in South Africa’, said RailRunner CEO Charles Foskett. ‘This will enable Transnet to offer a complete end-to-end transport solution for its customers, while reducing costs, harmful emissions and highway traffic.’