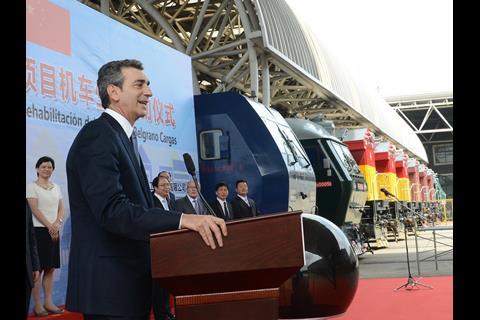 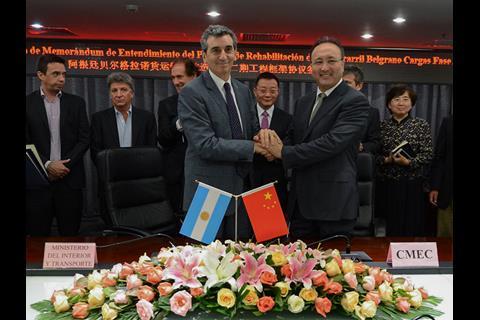 ARGENTINA: Minister of the Interior & Transport Florencio Randazzo announced on September 8 that China Machinery Engineering Corp had signed a letter of intent to double the amount of funding it is providing to revive Argentina’s rail freight network.

‘It is a second tranche of US$2⋅4bn which we will entirely invest in renewing track and rail freight infrastructure through Argentinian companies’, said Randazzo, speaking during an official visit to China.

The minister pointed out that the first tranche of CMEC funding was already being used to ‘improve 3 000 km of track, repair wagons and acquire new locomotives and wagons which are now being built in China’. Deliveries of the 100 diesel locos being supplied by CRRC were expected to be completed within 90 days.

During his visit, Randazzo also agreed heads of terms for CRRC to establish a manufacturing and maintenance presence in Argentina. Chinese companies are to undertake ‘at no cost to Argentina’ a feasibility study for electrifying the San Martín commuter route in Buenos Aires, he announced following a meeting with China Railway Construction Corp.