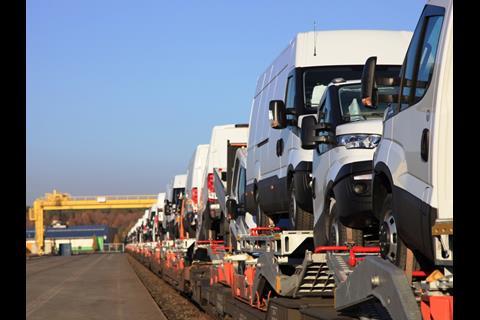 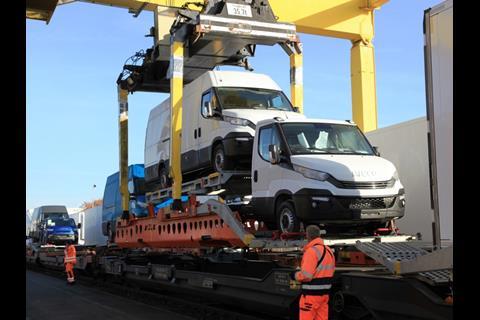 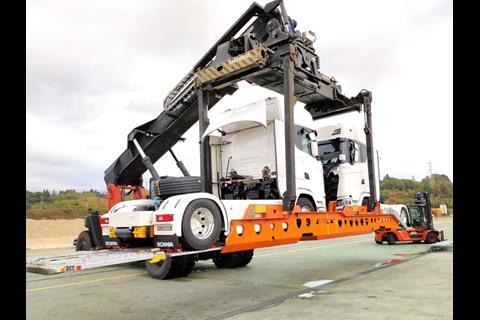 Branded as ‘roadrailLink’, the load carrier has been developed by Salzburg-based Vega International Car-Transport & Logistic-Trading (Vegatrans), and manufactured by Kässbohrer Transport Technik. Fitted with adjustable loading ramps, the carrier is designed to accommodate light commercial vehicles, tractor units or semitrailers, which can then be loaded into a standard T3000 pocket wagon using a reach stacker or gantry crane.

‘With r2L, we can transport 32 more light commercial vehicles per train than with conventional flat wagons’, says Vegatrans Managing Director Franz Blum. ‘For the first time, this enables us to combine inbound and outbound traffic in rail vehicle logistics to make it even more efficient.’ A standard intermodal trainset formed of 16 twin pocket wagons can transport 96 vans, 64 tractor units or 32 semitrailers, or a mixture of all three.

Vegatrans and TX Logistik have pioneered the concept on a twice-weekly service between Sommacampagna-Sona near Verona and Rheine in Nordrhein-Westfalen, which began running in September. This moves Iveco light commercial vehicles from Italy to GVZ Rheine and returns to Sommacampagna-Sona with Scania and Iveco trucks as well as semi-trailers from various manufacturers. TX Logistik is providing a complete terminal-to-terminal service, including fleet management and round-the-clock monitoring from its European Control Centre.

Vegatrans now has a fleet of 64 r2L load carriers, allowing the launch of a second route between Wörth am Rhein and Fernetti near Trieste. A further 32 units are under construction, and the partners are looking to develop further services including Italy – Poland or Austria – Benelux. Blum reports that the company is also looking at r2L variants to move other vehicle types, including agricultural and construction machinery, buses and heavy electric vehicles.