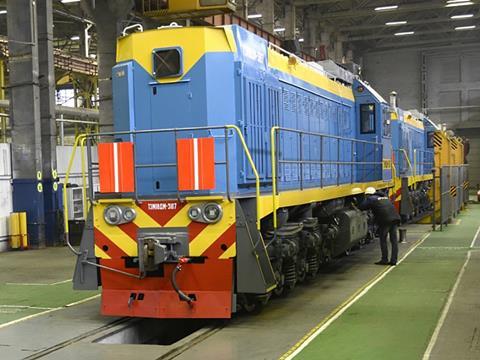 Argentina’s Minister of Transport Guillermo Dietrich has welcomed the first sugar traffic to move by rail in the province of Tucumán for 34 years. He attributed this to the government’s current investment programme to revive the 1 000 mm gauge Belgrano network, where tendering has been completed or is underway for 900 km of the 1 600 km of track that is to be renewed.

Alacant port operator TMS has introduced a second weekly rail service to Madrid, aimed at carrying containers moving between Spain and Algeria. TMS had introduced its first service in 2015, operated between the port and Madrid Abroñigal by Renfe Mercancías and avoiding 60 lorry movements each week.

RZD has signed an agreement with the Port of Yingkou in China that will see the latter acquire 49% of TLC Bely Rast, an RZD subsidiary created to develop a 180 ha logistics hub and intermodal terminal which would be the largest in the Moscow area.

The Prime Minister of India Narendra Modi inaugurated a perishable cargo centre at Ghazipur Ghat station on November 14. Intended to meet the needs of small farmers who can store unsold produce at ‘reasonable’ prices, it has four ripening chambers, four cold rooms and the capacity to store more than 400 tonnes of fruit and vegetables.