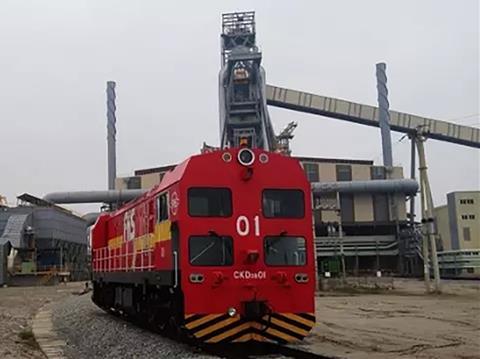 CRRC Dalian has delivered eight Type CKD0B locomotives to Formosa Ha Tinh Steel Corp in Vietnam. They have 4240ZJ diesel engines, are rated at 735 kW and are equipped for remote control operation.

Oakey Abattoir in Queensland took delivery of beef cattle by train for the first time in 21 years on November 30, following the state's A$2·5m investment in a 1·3 km rail spur to support expansion of the plant with the aim of developing export markets. One train can carry the equivalent of 44 double-trailer trucks.

Eurotunnel has announced that its Le Shuttle Freight service carried 1 483 741 lorries between January 1 and November 25 this year, the same number as in the whole of 2015. In the first 10 months of 2016, Le Shuttle Freight grew by more than 12%, outperforming the market which increased by 5%.

Between July and November China Railway Corp awarded CRRC subsidiaries contracts for the supply of wagons worth 7·14bn yuan.

To demonstrate the potential to use of the route for transit freight, two 40 ft containers have been shipped from Europe to the Georgian Black Sea port of Poti, transfered by rail to Yeraskh in Armenia, then continued to Iran by road to avoid the out of use line through the Nakhichevan exclave of Azerbaijan.