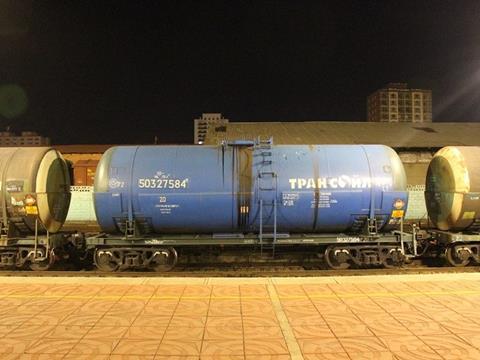 Ulaanbaatar Railway operated its first crude oil train for 12 years on May 15, when it hauled a trainload of 48 tank wagons for Transoil and Rosneft. The oil had been extracted in fields in eastern Russia and was destined for customers in China.

Bi-lateral agreements were signed on May 15 between public-sector bodies in Azerbaijan and Kazakhstan aimed at increasing the role of train ferries in intermodal freight. The agreements form part of the planned Trans-Caspian International Transport Route, which is centred on links between the ports of Aktau and Kuryk in Kazakhstan and Baku and Alat in Azerbaijan.

DHL Global Forwarding launched the first regular intermodal service between Shenzhen and Minsk on May 22. The rail service takes 12 days and it will be managed jointly by DHL and China Brilliant, an integrated logistics provider focused on manufacturing and consumer goods. The service will offer both Less-than-Container Load and Full Container Load options, and the partners hope to carry shipments including electronics, industrial and automotive parts, as well as fresh food in both directions.

The Railsider joint venture of RENFE Mercancías and logistics company Algeposa has opened a steel terminal at Irún in Spain on the French border, built at a cost of €4m and able to accommodate both 1 435 mm and 1 668 mm gauge wagons. Railsider has signed a contract to handle six trains a week to and from Germany, expected to rise to eight at the end of this year.