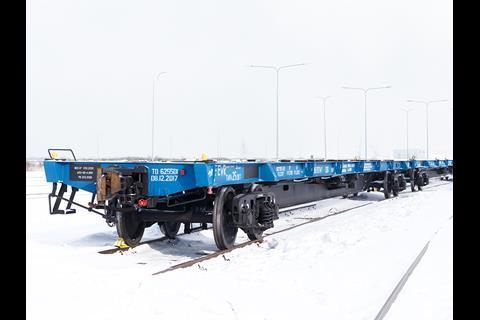 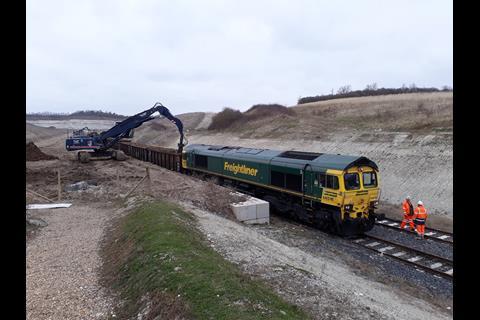 Mitsubishi Corp subsidiary MTF Logistics has leased 62 flat wagons from EVR Cargo subsidiary WagonPro. They are to be used on container services between the Port of Muuga and Koidula on the Russian border. EVR Cargo already cooperates with MTF Logistics on two intermodal routes.

DB Cargo has begun operating a weekly service carrying new cars between Kornwestheim in Germany and the Port of Barcelona. Comprising 22 wagons with capacity for 250 cars, at 685 m the train is the longest 1 435 mm freight service to be handled by RENFE, which is responsible for providing traction from Le Soler in France to Barcelona.

Medway of Portugal is due to begin operating on April 4 a daily container service for its parent MSC, linking the port of Sines with Sevilla in Spain and with capacity for 100 TEU per return journey. Traction Rail will be responsible for hauling the service in Spain, where customers will be able to undertake customs clearance at the terminal in Sevilla.

As the UK government issued the invitations to tender for the West Coast Partnership passenger franchise, the Rail Freight Group published a position paper for stakeholders and bidders setting out the freight sector’s key requirements from the West Coast Main Line, which carries around 90 000 freight trains a year. RFG wants to see ‘fair allocation’ of capacity south of Crewe to be released by the transfer of long-distance passenger services to High Speed 2, while infrastructure and operations north of Crewe should ‘meet the needs of all users’.

Connected to the national network by 14∙2 km of new railway, a terminal has been opened to handle materials for the construction of Mexico City’s new international airport, comprising two unloading tracks that will be used by a fleet of 375 hopper wagons hauled by 10 locomotives. The 1∙46bn pesos cost of the project has been met by Mexico City terminal railway Ferrovalle and the airport authority.

Ferroexpreso Pampeano of Argentina has begun movements of alfafa from Villa Mercedes in San Luis province to the port of Bahía Blanca, the first train comprising 18 wagons loaded with 260 tonnes for export to Saudi Arabia. This follows a two-year programme of renewals on 15 km of track, undertaken by the San Luis provincial government with the aim of developing rail freight traffic.

Czesław Warsewicz succeeded Krzysztof Mamiński as PKP Cargo President on March 27, and as a result stepped down from the supervisory board. Leszek Borowiec has been named finance director.

Freightliner operated its first service from Willesden in London to Barrington near Cambridge delivering spoil for Lynch on March 22.