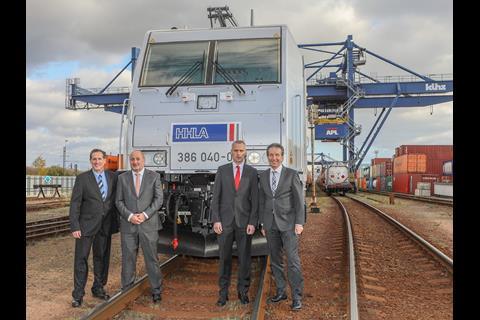 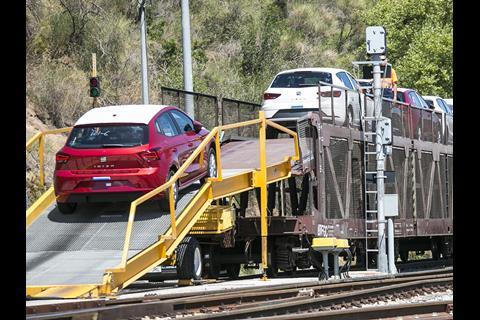 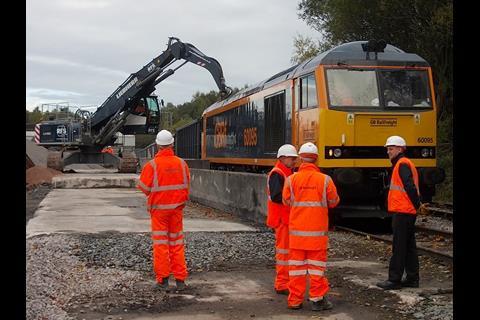 The 40th Traxx MS2 locomotive ordered by Hamburger Hafen & Logistik's rail subsidiary Metrans was handed over by Bombardier Transportation at the Praha Uhříněves container terminal on October 25. The locos are being used to haul trains between the North Sea ports of Hamburg, Bremerhaven, Rotterdam and Antwerpen, and the Czech Republic, Slovakia and Hungary. 'Our own fleet of locomotives enables us to better control our harbour-to-depot transport processes', said Metrans Chief Operating Officer Martin Horinek. ‘This will allow us to be even more reliable, to be more flexible in response to the requests of our customers and to offer new services.’

Catalunya operator FGC and Comsa Rail Transport’s contract to move vehicles between the SEAT factory in Martorell and the Port of Barcelona has been renewed for a further three years. The Autometro service has operated since 2008, with 411 m long trains of double-deck wagons carrying 170 vehicles operating three trips per weekday and carrying 105 000 vehicles/year.

Uruguay’s National Port Administration has called tenders to build and operate a cellulose and chemical terminal in Montevideo docks. This would include sidings connected to a rail link to the port which is to be built under the Ferrocarril Central project.

Hanson spent £250 000 rehabilitating a siding at its plant at Ashton-in-Makerfield in northwest England to enable freight to run to the site for the first time in 10 years on October 15. GB Railfreight will operate three trains a week to Ashton from a quarry at Shap, hauled by Class 60 diesel locomotives and carrying 200 000 tonnes/year. 'These three trains a week will take around 1 500 truck journeys off the road each year', said Simon Day, Hanson UK’s Regional General Manager.

After a short break, regular freight services between Yiwu in China and the Lovosice Terminal in the Czech Republic resumed in September.

On October 24 DB Cargo UK opened a £6m steel logistics centre at Wolverhampton, which will receive imported steel from as far afield the Netherlands and Sweden via the ports of Immingham, Hull and Boston for companies including ArcelorMittal, Tata Steel and SSAB.

Logistics company Katoen Natie and Union Pacific opened a plastic packaging facility at the Prime Pointe Industrial Park near Dallas on October 23. Plastic resin pellets will be shipped to the warehouse by rail, then packaged and loaded into intermodal containers for transport to ports. ‘Katoen Natie‘s Dallas location is a great example of freight rail utilisation to provide growth opportunities and overall economic development for this region’, said Kari Kichhoefer, Vice-President Industrial, Union Pacific.

On October 10 quarry company ERB Invest opened a siding at Černetice on the Strakonice – Vimperk line in the Czech Republic which will be used to transport aggregates to construction sites.