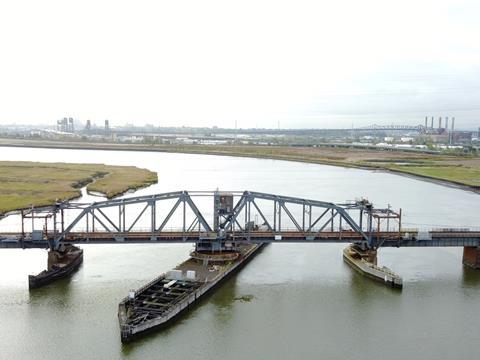 USA: The Federal Transit Administration on March 18 announced that it had ranked the Gateway Programme to increase rail capacity between New York and New Jersey with a ‘medium to low’ financing status, making it ineligible at present for federal Capital Investment Grants.

The ranking applies both to the planned $30bn programme to add two new rail tunnels beneath the Hudson River, where the existing bores were badly damaged in 2012’s Superstorm Sandy, and to the scheme to replace the Portal Bridge over the Hackensack River at Kearny. The 1910-built opening structure is a major cause of delays to both Amtrak and NJ Transit services on the busy Northeast Corridor.

The state of New Jersey last year committed to provide $600m of the $1·5bn cost of the Portal Bridge project, and FTA has classified the work as having a ‘medium high’ utility overall. But despite the funding commitments, FTA says it does not believe the financial guarantees offered by the two states are sufficient to protect taxpayers in the event of cost over-runs. New Jersey officials have argued that the refusal to allocate federal support is causing needless delay to a project which has already received environmental approvals.

NJ Transit Executive Director Kevin Corbett told local media that the rankings were ‘very disappointing’, adding that the agency would need to ‘demonstrate to FTA that the local match funding is 100% secure. FTA knows that technically it’s a good proposal.’