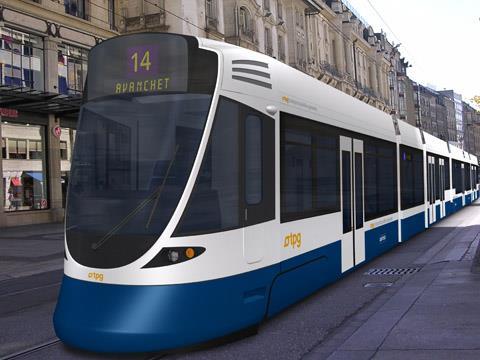 SWITZERLAND: Genève public transport operator TPG has placed an order worth SFr154m for 32 Stadler Tango trams. The contract includes two options for a further 14 and 10 vehicles.

The bi-directional six-section vehicles will be 44 m long and 2 300 mm wide with a capacity of 261 passengers, including 88 seated, and will weigh 57 tonnes. Delivery of the first seven vehicles is due in 2011 and the order will be completed by 2014.

The trams will provide additional capacity for TPG’s expanding metre-gauge network. An extension of Lines 14 and 16 from Avanchet to Meyrin-Gravière entered service on December 13, and the remaining section to CERN is due for completion by the end of 2010.

The first six of 18 new Cityrunners are now in service on Line 14 to supplement the 21 low-floor LRVs already supplied by Bombardier in 2004. They will also operate the Cornavin — Onex — Bernex tram line once it opens in 2011.