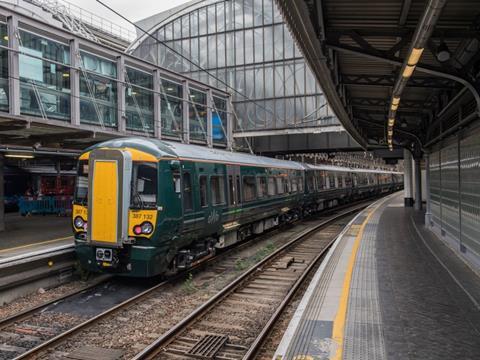 UK: On September 5 Great Western Railway put into passenger service the first two of 45 Class 387 Electrostar electric multiple-units, operating in pairs on eight services a day in the morning and evening peaks between Hayes & Harlington and London Paddington.

To replace ex-British Rail Class 165 and 166 diesel multiple-units on Thames Valley commuter services, GWR is leasing 37 four-car Bombardier Electrostar EMUs from Porterbrook, joining eight already ordered by GWR. This will enable the DMUs to be cascaded to other parts of the GWR network, ‘providing additional capacity where it is needed most’, according to the train operator.

As well as providing an additional 1 400 seats every day between Hayes & Harlington and London Paddington, the new air-conditioned trains offer at-seat power sockets and free wi-fi for passengers. GWR notes that a 12-car Electrostar formation would provide 97 more seats than its longest DMU-worked service.

‘The Thames Valley is one of the most popular rail corridors in the UK’, said GWR Managing Director Mark Hopwood. ‘We have promised the current fleet would be upgraded to provide much-needed additional capacity and faster journey times.’