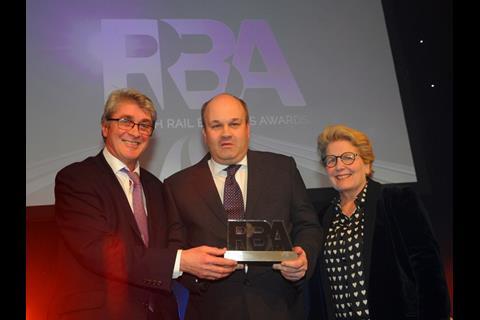 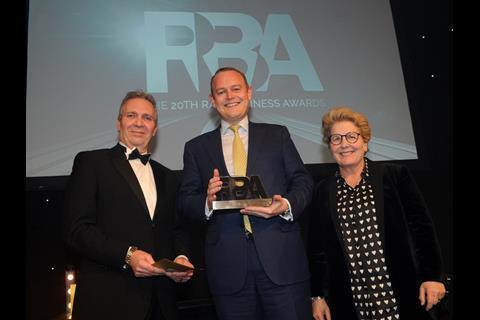 Hosted by Railway Gazette at London’s Hilton hotel on Park Lane on February 22, the event bought together around 600 senior executives and industry experts from across the UK rail sector. The 20th anniversary awards were presented by TV and radio celebrity Sandi Toksvig.

‘Once again, these awards have highlighted the contribution made by so many individuals and companies throughout the UK rail industry, who put a huge amount of effort, vision and skill into developing their business and serving their customers’, said Railway Gazette Editor-in-Chief Chris Jackson. ‘These awards have become a highlight of the industry calendar, providing a valuable opportunity to pay tribute to all the hard work that goes on across the UK rail sector, day in, day out.’

In awarding GWR the coveted title of Rail Business of the Year, the judges said the operator had shown ‘incredible versatility and resilience through a very difficult period', despite the disruption caused by electrification and upgrading works. GWR also won the Rolling Stock Excellence award for bringing into service its Class 387 EMUs on Thames Valley commuter services, and the Safety & Security Excellence award for a partnership project to reduce anti-social behaviour on the Severn Beach branch.

Chiltern Railway won Train Operator of the Year for completing and launching its new route to Oxford, as well as its consistently strong performance and high levels of customer satisfaction.

ScotRail Alliance Managing Director Alex Hynes was named Industry Leader of the Year, while the alliance’s Head of Integrated Control, Mark Ilderton, took the award for Young Professional of the Year.