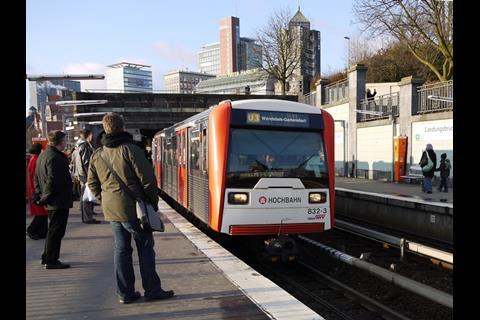 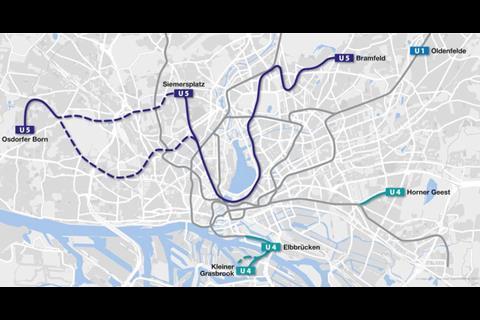 GERMANY: The Hamburg Department of Economics, Transport & Innovation announced on September 29 that the city is launching a consultation on planned metro expansion projects.

The Hamburg Senate intends to allocate €72m of federal funding to complete studies and planning, in addition to the €2·4m already approved.

A feasibility study for the first phase of metro Line U5 is due to be completed in November at a cost of €0·8m. U5 would link Bramfeld in the northeast with City Nord via Steilshoop and Sengelmannstraße station on Line U1. Design work is expected to begin next year and would require €40m, which forms the largest part of the funding that the Senate hopes to secure. Construction could begin in 2021, with commissioning expected no earlier than 2026.

A feasibility study for the second phase, from City Nord to Siemersplatz via the city centre, is due to begin in early 2016 at a cost of €2m. This would be completed by mid-2017, and design work would start in 2017-18.

The final section of U5, running west from Siemersplatz to Osdorfer Born, is at an earlier stage of planning. A feasibility study can only be carried out once transport authority HVV has chosen its preferred alignment and technology for a future route in the west of the city. The northern variant would run from Siemersplatz via Stellingen, whereas the southern option would go from Hoheluftbrücke via Diebsteich. The chosen route would either be built as the western part of U5 or as S-Bahn Line S32.

Design work for two extensions of Line U4 would cost €15m each. The feasibility studies cost a combined €0·8m and are due to be completed shortly. The first U4 project is an eastern branch from Horner Rennbahn to Dannerallee in Horner Geest via Stoltenstraße; at present U4 trains operate over Line U2 beyond Horner Rennbahn as far as Billstedt. Design work is to start next year, with construction to follow in 2019 and opening expected in 2024-25.

If Hamburg were successful in its bid to host the 2024 Olympic Games, Line U4 would also be extended south from the future terminus at Elbbrücken to Kleiner Grasbrook, although this extension would only be completed after the games. Design work is to start next year, with construction expected to follow in 2019.

Meanwhile, work on Oldenfelde station between Farmsen and Berne on Line U1 is to begin in 2018 for completion in 2019. This is estimated to cost €14·1m, following design work valued at €0·8m.