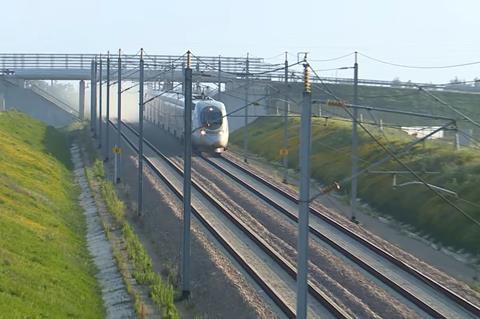 MOROCCO: Speaking at a press conference on November 20, Moroccan National Railways Director General Mohamed Rabie Khlie told media representatives that the high speed Al Boraq service launched by King Mohamed VI and French President Emmanuel Macron on November 15 2018 had carried 2·5 million passengers in the nine months from January to October. The number of trips is expected to reach 3 million in the first full calendar year in December, equivalent to about 8 250 passengers a day.

Al Boraq services operate up to 28 return workings a day over the 363 km between Tanger, Kénitra and Casablanca, reaching a maximum speed of 320 km/h. The fleet of 12 TGV 2N2 double-deck trainsets supplied by Alstom had operated around 7 000 trips, achieving punctuality of about 97%. Khlie had indicated earlier that traffic on the Tanger – Casablanca corridor had increased by around 35%, journey time having been cut from 4 h 45 min to 2 h 10 min.

Passenger satisfaction on Al Boraq trains was recorded at 92%, thanks in part to a wide range of fares, comfortable interiors with guaranteed seats, plus high standards of service on board and at stations.

ONCF said that the performance of Al Boraq services was ‘very satisfactory’, achieving an operating margin ‘ranking among high international benchmarks, ensuring that all operating costs were covered’. The high speed service had also proved to be a catalyst generating socio-economic activity, ‘symbolising a new era of mobility’.

Accompanied by President of the National Foundation of Moroccan Museums Mehdi Qotbi, Khlie took the opportunity to unveil commemorative sculptures themed around art and travel at Casa-Voyageurs and Rabat-Agdal stations.