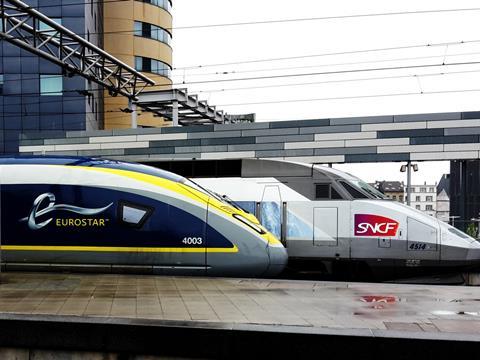 EUROPE: The European Commission announced on May 13 that it had approved a shareholders’ agreement which will see French national railway SNCF acquire sole management control of cross-Channel high speed train operator Eurostar International Ltd. This approval is subject to commitments which are designed to facilitate the entry of new operators on the London – Brussels/Paris routes.

Eurostar International is owned by SNCF (55%), the UK Treasury (40%) and Belgian national railway SNCB (5% minority stake). On March 4 the UK government announced an agreement to sell its stake to the Patina Rail consortium of Caisse de dépôt et placement du Québec (30%) and Hermes Infrastructure (10%); this deal is not affected by the new shareholder agreement, which gives its SNCF Mobilités passenger subsidiary sole control of Eurostar International. Eurostar told Railway Gazette International that the extent of the private investors’ involvement in the management of the business is still to be decided.

The European Commission found that SNCF’s sole control ‘as originally notified’ would have hindered the entry of competitors. A market survey found particular concern about access to stations in France and Belgium, maintenance facilities in France, Belgium and the UK, and train paths at peak times.

In order to resolve these concerns, Eurostar, SNCF Mobilités and SNCB have committed to ensure that any new entrant would have ‘fair and non-discriminatory’ access to:

The Commission said it ‘takes the view that the commitments offered reduce the barriers to entry for new operators seeking to offer international rail passenger transport services on the London Paris and London Brussels routes’, and thus the planned change in control ‘does not raise any competition concerns.’