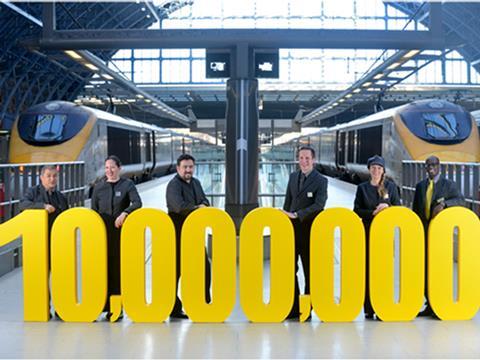 EUROPE: Cross-Channel high speed train operator Eurostar International carried more than 10 million passengers during 2013, setting a new ridership record. The annual total was slightly up on the 9·9 million handled in the previous year.

Announcing the milestone on December 30, Eurostar reported that it had now carried more than 140 million passengers since the start of services between London, Paris and Brussels in November 1994.

At that time Eurostar was a joint venture between the three national railways of Britain, France and Belgium, and was predicting that ridership would reach 10 million passengers/year by 1998. In the event, traffic growth was slowed by competition from low-cost airlines and later by the economic downturn. Eurostar was subsequently restructured as a stand-alone company although still owned by three state-owned bodies.

Eurostar attributed the increased ridership in 2013 to 'recent signs of a recovery in the UK economy, along with a busy summer for leisure travel'. The year also saw the operation of additional services, including the trial Route du Soleil direct service between London and Aix-en-Provence in the south of France which ran on selected summer weekends. The trial is to be repeated this year, and Eurostar says the route will be introduced 'on a permanent basis from 2015'.

Commercial Director Nick Mercer said '2013 has been a record-breaking year for Eurostar. With a leap in passenger numbers as well as the introduction of new routes and new destinations, we are seeing growing demand from customers across Europe and indeed around the world. As we enter our 20th year of operation, we have a year of activity planned on the run up to our 20th birthday in November.'