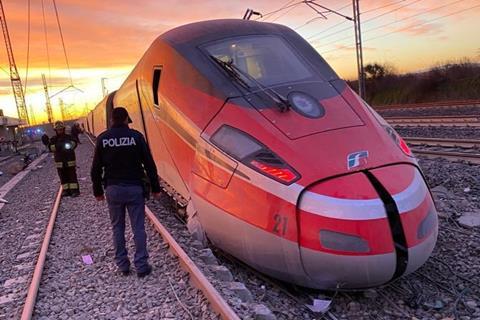 ITALY: There are clearly many questions to be answered about the co-ordination of signalling and infrastructure maintenance processes, following the high speed derailment of a Trenitalia Frecciarossa 1000 trainset at Livraga, south of Lodi, on February 6. This was only the second fatal accident to occur on a dedicated high speed line in almost 60 years of operation. 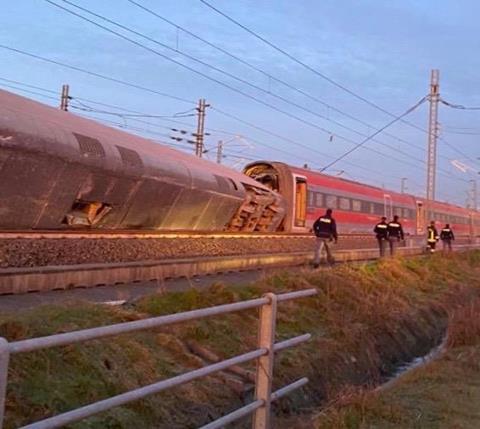 The first southbound departure of the day, Train AV9595 to Salerno had departed punctually from Milano Centrale at 05.10. Having accelerated after joining the Milano – Bologna high speed line, the train was travelling at 292 km/h when it derailed at 05.34.

The leading vehicle left the tracks, separated from the rest of the train and overturned, striking a wagon in a siding before coming to rest facing the opposite way from the direction of travel about 400 m from the point where it had left the track. The driver and another member of railway staff travelling in the cab were killed in the multiple impacts.

The rest of the train continued in the direction of travel, remaining broadly in line but derailed. The second vehicle rolled over onto its side, while the remaining six cars remained upright. Fortunately the train was lightly loaded – apart from the driver and his colleague, three other staff were on board, along with 28 passengers, most of whom suffered only minor injuries.

As with a number of other accidents involving modern trainsets, it is noteworthy that the welded aluminium bodies of the seven cars behind the leading car stayed largely intact. Apart from the damage to the cab area caused by the collision with the standing wagons, the structure of the leading car was relatively undamaged, although it had become separated from its bogies. This is likely to have been a result of most impact forces being absorbed longitudinally in the course of the accident.

The cause of the derailment must be determined officially by the public prosecutor in Lodi, Domenico Chiaro. On the afternoon after the accident, he confirmed that the train had derailed on a turnout, adding that human error may have been to blame.

According to local media, initial investigations suggested that a facing turnout leading from the southbound high speed track into sidings used as an infrastructure maintenance base had been incorrectly set. One report added that this had not been detected by the train control system as the power supply to the turnout had been disconnected.

Track maintenance work had been taking place in the area overnight, and investigators will no doubt examine both the work carried out and the details of communications between maintenance staff and the line control centre in preparation for reopening the line.

The Milano – Bologna line has been operating safely with ETCS Level 2 for more than a decade. This relies on the safety integrity of local interlockings and track occupancy detection to inform the control system. A key consideration for the investigators will be whether the Livraga interlocking was incorrectly reporting that all turnouts along the route were correctly set, locked and detected, allowing the ETCS to issue a movement authority for AV9595 to proceed at full speed with tragic consequences.