Construction is already underway on the high speed line’s northern terminus at Sabarmati near Ahmedabad.

INDIA: Larsen & Toubro has been confirmed as low-bidder for the largest civil works contract on the planned Mumbai – Ahmedabad high speed line, the National High-Speed Rail Corp announced on October 19.

Covering a 237 km section through Gujarat from Zaroli on the Maharashtra state border, 156·6 km north of Mumbai, to Vadodara, package C4 covers around 47% of the 508 km route.

The lump-sum design and build package covers the civil works for a double track high speed line, including viaducts and tunnels plus 24 river and 30 road bridges, but it excludes several of the larger river crossings. The package also covers the construction of four intermediate stations at Vapi, Billimora, Surat and Bharuch, plus a maintenance depot at Surat. 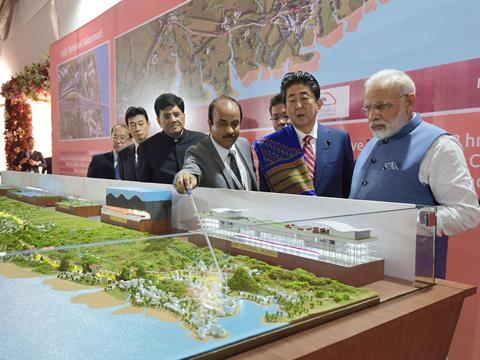 Backed by financing from the Japan International Cooperation Agency, NHSRCL had invited bids for package C4 in March. Three consortia were shortlisted to submit financial offers after the technical bids were opened on September 23. L&T emerged as low bidder with an offer of Rs249·8bn, against Rs282·3bn from a consortium of Tata Projects, J Kumar Infraprojects and NCC, and Rs368·7bn from Afcons Infrastructure, Ircon International and JMC Projects India.

However, the low bid is still reported to be around 24% higher than NHSRCL’s initial budget. The promoter is expected to negotiate with the preferred bidder to try and reduce the price or look at the options for descoping the work. If the contract can be finalised by the end of November, NHSRCL is expected to arrange a formal groundbreaking ceremony before the end of 2020.

According to the promoter, around 85% of the land required for the Gujurat section of the route has already been acquired.