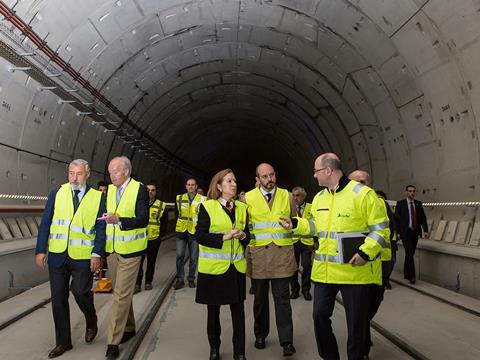 SPAIN: On April 20 Development Minister Ana Pastor visited the 7⋅3 km tunnel between Atocha and Chamartín stations in Madrid, which upon completion of railway fit-out works will connect the high speed routes running north and south from the capital.

Laying of slab track and the provision of safety facilities, including 10 emergency exits and three ventilation shafts, has cost a total of €240m. Contracts to install signalling and telecommunications systems as well as overhead electrification equipment were awarded in May 2015, also covering the two additional tracks being built between Atocha and Torrejón de Velasco where the high speed lines to Sevilla and Valencia diverge. A separate contract to undertake tracklaying between Atocha and Torrejón de Velasco was awarded in July 2015.

The new 1 435 mm gauge tunnel between Atocha and Chamartín runs at an average depth of 45 m, passing beneath eight metro lines as well as the two 1 668 mm gauge tunnels connecting Madrid’s termini via Recoletos and Sol. The route passes above metro Line 9 close to Chamartín station.