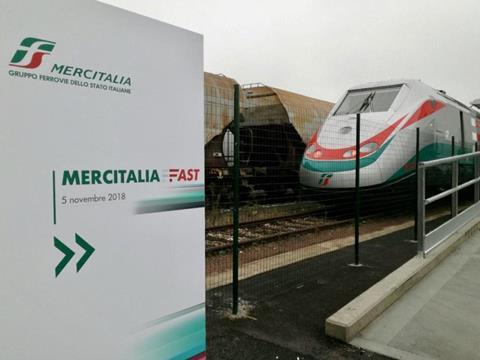 Operated by a converted ETR500 trainset, the Mercitalia Fast overnight service will convey express parcels and premium freight between the Maddaloni-Marcianise terminal near Caserta and Bologna Interporto, using the country’s north-south high speed line. According to Mercitalia Logistics General Manager Marco Gosso, Mercitalia Fast will be the first express freight service to use the Alta Velocità/Alta Capacità high speed network. With the train running at an average speed of 180 km/h, the end-to-end journey time will be just 3 h 30 min.

The trainset has been adapted to carry 1 m3 roll cages with a 220 kg payload, which will make loading and unloading ‘quick, efficient and safe’. With the 12-car train able to carry the equivalent of 18 articulated lorries or two Boeing 747 freighters, the daily train is expected to relieve the main north-south A1 motorway of around 9 000 lorries a year, reducing CO2 emissions by 80% compared to road haulage.

‘Our goal is to offer a tailor-made service to those customers who need to deliver the goods quickly, reliably and on time, features that are increasingly in demand with the e-commerce boom’, Gosso added.

‘With the launch of the new Mercitalia Fast service, we are implementing a paradigm shift to bring freight transport into the third millennium’, said Finance Minister Luigi Di Maio. ‘We are making the movement of goods fast, safe and environmentally-friendly. These are the concrete actions of a government that strongly emphasises intermodality. We are taking the first step of a broad and defined project that aims to make Italian high speed freight transport a cutting-edge model in the European context.’

Pointing out that ‘Mercitalia is already the largest Italian player in the European freight market, with a consolidated turnover of over €1bn a year’, FS Group CEO Gianfranco Battisti added that ‘the development and strengthening of freight transport is a priority for FS, along with regional and long-distance passenger traffic’. The group had defined ‘a new vision, a new strategy and a new business model’, under which Mercitalia would reorganise FS Group's freight activities to create ‘a real Italian champion able to compete on equal terms with the foreign giants of the sector’.