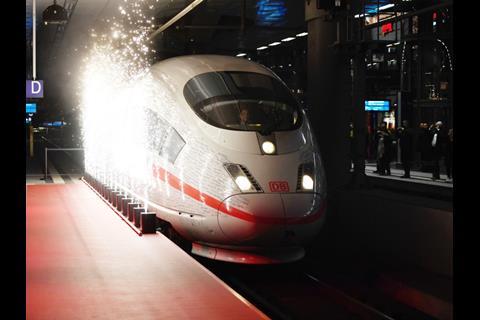 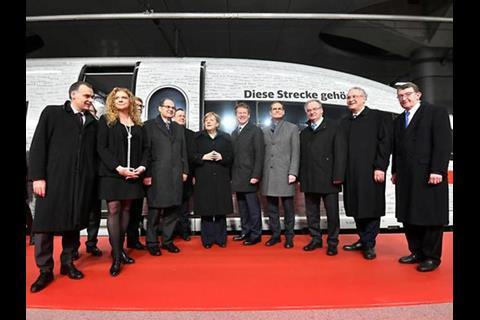 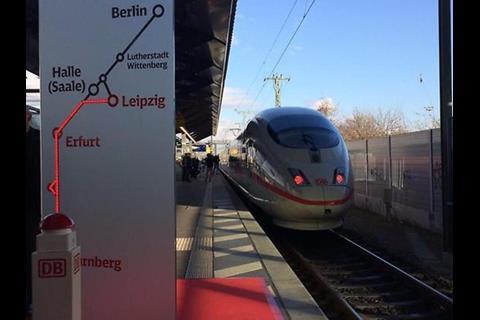 GERMANY: Special trains from München and Nürnberg, celebrations in multiple cities and a spectacular arrival in Berlin Hauptbahnhof marked the inauguration on December 8 of the railway known as German Unity Project VDE8. Commemorative events had been staged in Nürnberg, Erfurt, Leipzig and Wittenberg to mark the formal opening of the last major element in the München – Berlin upgrading scheme, the 107 km high speed line between Ebensfeld and Erfurt.

The day culminated at Berlin Hauptbahnhof with the arrival at 16.15 of the two special trains formed of ICE3 trainsets. Out of one of them stepped Chancellor Angela Merkel, who had boarded it shortly before at Berlin Südkreuz. She inscribed her name on the bodyside, already adorned with the signatures of many other guests.

In her formal speech inaugurating the VDE8 project, she congratulated those who had built the bridges, constructed the tunnels and laid the tracks. The €10bn scheme was ‘breathtaking’, she said, later insisting that ‘we must be in a position in the 21st century to handle major projects if we want to keep up with the times’.

Federal Transport Minister Christian Schmidt described the project launched in 1991 as the ‘centrepiece of German Unity’. Also on board the VIP train were the Minister-Presidents of the three Länder through which the route runs: Stanislaw Tillich from Sachsen, Reiner Haseloff from Sachsen-Anhalt and Bodo Ramelow from Thüringen.

DB Chairman Richard Lutz thanked everyone involved in the scheme and claimed that the München – Berlin timing of under 4 h by Sprinter trainsets from December 10 meant that ‘we are unbeatable by car and in striking distance of air’. He emphasised that ‘the route is much more than this single connection — it has enormous reach across the whole federal territory.’

Read more about Unity Project 8 in the December 2017 issue of Railway Gazette International.