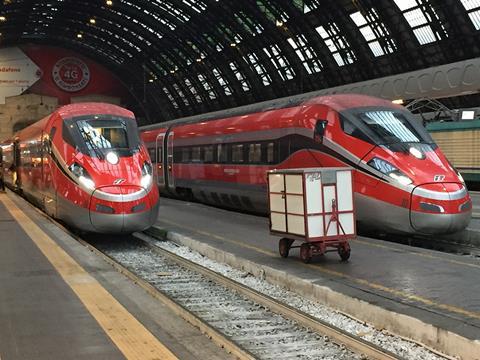 EUROPE: Italian national operator Trenitalia has confirmed that it is holding preliminary discussions with its suppliers and relevant regulatory bodies regarding the possible launch of an open access high speed service between Paris and Brussels.

Speaking in Milano on October 28, Pietro Diamantini of FS Group's Passenger Division suggested that the route could be the first international corridor to use the V300 Zefiro trainsets which Trenitalia is currently receiving from a consortium of Bombardier and AnsaldoBreda. Trenitalia has ordered 50 of the eight-car multi-system high speed trains under a €1·6bn contract awarded in September 2010.

Trenitalia has placed 13 of the trainsets, which it designates ETR1000 or Frecciarossa 1000, into revenue service on the north-south high speed line between Torino and Napoli. A further two trainsets are undergoing final commissioning, while two more are being used for test running at up to 385 km/h on the Torino – Milano high speed line. This forms part of infrastructure manager RFI's plan to raise operating speeds on three sections of the AV/AC network to 350 km/h.

The ETR1000 trainsets are being supplied with provision for operation in up to seven European countries, and Bombardier says they are fully compliant with relevant EU Technical Specifications for Interoperability. Trenitalia is understood to have asked Bombardier to assess the cost of equipping some of its fleet with safety and train control equipment for operation in France and Belgium.

Bombardier expects to complete delivery of the ETR1000 fleet by February 2017.