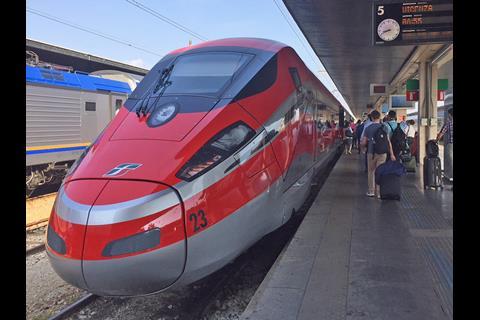 EUROPE: The first of five ETR1000 high speed trainsets being modified to operate Trenitalia’s planned open access service between Milano and Paris is expected to begin test running in France next month, following the completion of retrofitting work.

The trainsets are being fitted with TVM cab signalling and KVB automatic train protection to operate on the high speed and conventional networks. They are also being equipped with a wider pantograph head, as a width of 1 600 mm is specified in France compared to 1 450 mm in Italy.

According to Trenitalia’s technical director Marco Caposciutti, no other changes are required as the ETR1000s are fully TSI compliant.

The EU Agency for Railways is reportedly monitoring the project as a test case for its new cross-acceptance regime.

The 14 additional sets ordered from Hitachi Rail Italy and Bombardier Transportation earlier this year will be equipped from new for international operation.

Following initial verification on a test track, trial running will be undertaken on various high speed lines in France. Trenitalia expects to launch its service for the summer 2020 season, initially running three trains each way per day.