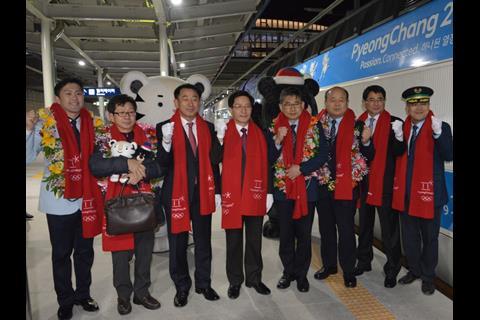 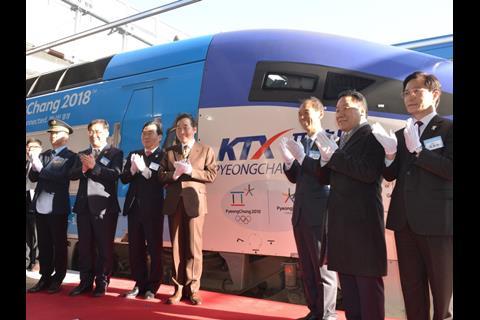 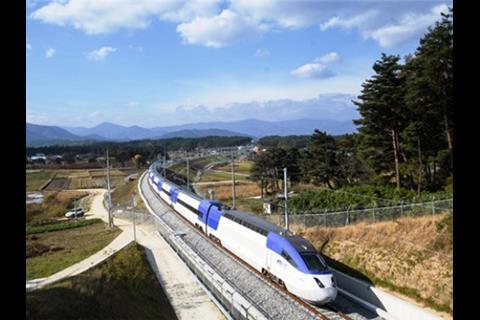 SOUTH KOREA: Revenue operations began on December 22 of the Seoul – Gangneung high speed railway, following an inauguration ceremony at Gangneung the previous day attended by Prime Minister Lee Nak-yon and officials from the Ministry of Land, Infrastructure & Transport and the Ministry of Sports, Culture & Tourism.

Linking the northeastern coastal city with the capital and the international airport at Incheon, the 250 km/h Gyeonggang line will also serve the venues for the Winter Olympic Games to be hosted in PyeongChang on February 9-25 2018. Constructed by Korea Rail Network Authority at an estimated cost of 3·7tn won, the 120·7 km single-track line connects the east coast region with the previously-completed Jungang line at Donghwa, near Wonju; it has five intermediate stations at Manjong, Hoengseong, Dunnae, PyeongChang and Jinbu. The station at Jinbu has been designed to accommodate 20-car trains, as it will serve the main Olympic stadium.

Running through the Taebaek mountains, the line is steeply graded, and around 63% is in tunnel. This required the construction of 34 tunnels and 53 bridges, including the 21·7 km Daegwallyeong tunnel, the country’s longest rail tunnel which incorporates almost 5 km of emergency access bores. Construction was completed in June, and test running has been underway since the end of October.

Completion of the direct line cuts the distance from Gangneung to the capital to 222·7 km, with KTX services offering a journey time of 1 h 40 min, compared with around 6 h using Mugunghwa trains on the longer conventional line via Donghae and Yeongju or 3 h by express bus. Journey time for the 277·9 km to Incheon Airport using the Arex line from Seoul will be 1 h 58 min.

Korail is initially operating 18 trains each way to and from Gangneung, increasing to 26 at weekends. Of these, 16 run through to Incheon Airport and 10 terminate at Seoul Main Station. During the Olympics, Korail expects to operate another 10 trains/day to and from Cheongnyangni and 15 to Sangbong.

To operate over the new line, the KTX trainsets have been equipped with LTE-R communications systems supplied by a joint venture of Samsung and local telecoms company KT, using technology previously deployed on the Busan metro. This will also support onboard wi-fi for passengers.

A fleet of EMUs has been acquired to operate regional services to the intermediate stations, and new high speed trainsets with distributed traction are expected to enter service by 2021.