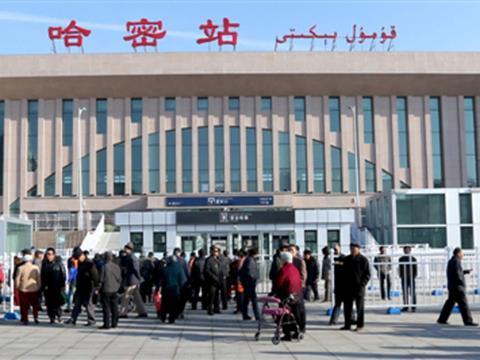 Construction of the line began in January 2010. The alignment through the Gobi Desert has been designed for 250 km/h operation and features extensive windbreaks to protect trains from crosswinds. Sections of the line are under 24 h video surveillance, and intrusion detection systems are planned.

The new line will eventually carry all passenger services on the corridor, allowing the existing line to be dedicated to freight traffic. This would raise freight capacity from 70 million tonnes a year to 200 million. The new line is initially carrying four services each way per day, worked by CNR Changchun CRH5A trainsets taking around 3 h.

From the end of the year trains will run for 1 776 km from Urumqi to Lanzhou in Gansu province, cutting the journey time by around a half to about 9 h. The completion of further high speed lines by 2017 will enable Urumqi – Beijing journey times to be reduced from 40 h to around 16 h.