Passenger volumes up at Eurostar 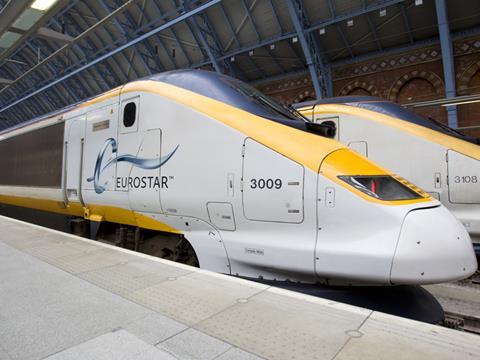 The operator carried 9·9 million passengers in 2012, 2% up from 9·7 million for the prior year, whilst operating profit rose from £25·0m to £52·3m. Sales revenue was down slightly at £799m from £803m in 2011. The operator noted that while business travel volumes remained largely flat, the leisure market showed ‘continuing resilience’, with leisure volumes up 3% on the prior year.

Reflecting on London’s year in the global spotlight, Chief Executive Nicolas Petrovic noted that ‘the combination of the Olympic Games and the Jubilee showcased London as a prime travel destination’. However, the operator reported that the strongest growth of the year was actually seen in the final quarter.

Petrovic also reiterated Eurostar’s fleet renewal ambitions, with the first refurbished Class 373 ‘e300’ trainsets due into traffic next year, to be augmented by 10 Siemens Velaro e320 sets from 2015. A spokesperson for the operator confirmed that an ‘internal debate’ was ongoing about how the new trains would be deployed, with no announcement expected ‘until the autumn’. It had been envisaged that the expanded fleet would enable Eurostar to introduce regular direct services to cities such as Amsterdam and Köln; at present Eurostar only operates seasonal services to destinations beyond its core London – Paris/Brussels route.

This is the second time that Eurostar has been able to report as a stand-alone entity following its restructuring in 2010. Previously an unincorporated tri-national partnership, Eurostar is now majority owned by French national operator SNCF, with the UK’s Department for Transport owning 40% through London & Continental Railways, and SNCB holding a 5% stake.