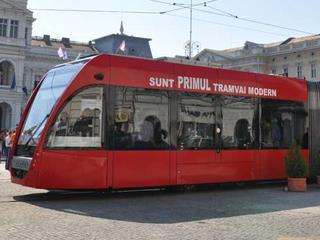 ROMANIA: The first Imperio tram produced by Astra Vagoane was unveiled outside Arad city hall on August 25. The low-floor tram has been developed in collaboration with Siemens, which supplied the electrical equipment.

At the unveiling, the mayor of Arad said he hoped the city's metre-gauge network would be an early customer for the locally-produce tram, which has attracted interest from elsewhere in Romania and Hungary.

Astra Vagoane is offering metre and standard gauge versions of the Imperio design, with three or four sections giving capacity of 168 or 240 passengers. Prices start at around €1·7m.