An ABC of good design

CHINA: With the Summer Olympic Games just a few weeks away, major infrastructure projects are coming to fruition across Beijing. Prominent amongst these projects is the automated rail link to the city's international airport, where design has been given a high priority. 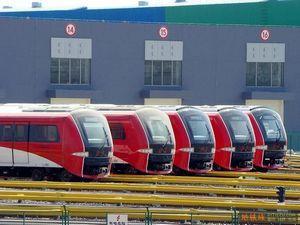 Beijing has become the latest member of the growing group of cities with dedicated airport rail links, with the formal inauguration on June 30 of the 28 km line serving Beijing Capital International Airport. The fully-automated line connects stations at Terminal 2 and Terminal 3 with the financial district at Dongzhimen where city centre check-in facilities are provided, along with interchange to metro lines 2 and 13. An intermediate station at Sanyuanqiao offers a connection with Line 10 leading to the Olympic venues in the north of the city.

Being developed under a BOT concession by a consortium of five Chinese companies at a cost of 5·4bn yuan, the line will be operated by a private-sector company: Beijing Dongzhimen Airport Express Rail Co.

The line uses Bombardier's proven ALRT technology, which was developed for the Vancouver SkyTrain and has since been adopted for several other projects. The fleet of 10 four-car linear-motored trains has been supplied by Changchun Railway Vehicles, with Bombardier providing the electrical equipment, bogies, traction and braking systems under a US$44m contract awarded in March 2006. The line is expected to carry up to 4 500 passengers/h in each direction, with services operating for 15 h per day. The trains will run at up to 100 km/h, giving an end-to-end journey time of 16 min.

Design has been a key focus of the project from the outset, particularly as the line serves the dramatic new Terminal 3 at the airport which was opened for international flights at the end of February. Together, the new terminal and the airport rail link will provide a truly 21st century introduction to visitors arriving in Beijing for the Games.

Public perception of rail traffic generally, and public transport in particular, tends to develop in stages. In the first phase, the priority tends to be the development of connections between the city and the surrounding region. At a later phase the focus is on extensions and capacity expansion. Only when railways must face up to competition - particularly with the private car - do the operators tend to start addressing customer requirements that go beyond the purely expedient. With the focus turning to 'secondary virtues' such as punctuality, reliability and comfort, the layout of the vehicles becomes more significant, and planners move on from thinking about pure transport and more about the whole journey experience.

This sort of learning curve is becoming increasingly apparent across China's railway and metro sector, and has been a strong influence on the development of the Beijing airport rail link. For more than 50 years the airport has relied on road access - in the form of a bus shuttle service - but this is no longer considered adequate on capacity grounds or attractive enough to compete with the increasing number of cars on Chinese roads. The goal was to achieve - or if possible exceed - the same level of quality for the ground access as passengers experience on the aircraft. And clearly the mode best placed to deliver both quality and quantity is rail.

At the same time, Beijing was looking for its new airport rail link to be a highlight of the capital's Olympic Games preparations, and in the longer-term a benchmark for the whole rail-air sector.

To help meet this objective, CRC appointed Tricon Design AG from Germany to assist with the development and styling of the trains, building on the work which we had previously undertaken for the Express Rail Link in Kuala Lumpur and a number of other high-profile railway projects. In addition, Tricon was contracted by the operator to develop the brand name and logo, enabling us to include a significant level of corporate design into the whole project.

What's in a name?

In developing a brand name, we were looking for a concise, clearly recognisable, and easily identifiable name that would be understandable internationally, and not least pronounceable by local people with no foreign language skills. The result was 'ABC' - an abbreviation for Airport - Beijing - City, which we believe will fulfil all these requirements and become widely recognised far beyond the borders of China. The bi-lingual logo also draws on elements of both the interior design and the Beijing landscape.

At the same time, it was important to establish a balance between the western lettering and Chinese characters. The colour of the logo is an integral part of the external livery of the trains, and as such becomes a constant element in the overall image. Many other features of the corporate design, such as staff uniforms and station signs, will also build on the ABC name to strengthen the operation's overall brand.

In developing the concept for the interior design and external livery, Tricon worked in close consultation with the operator. Various ideas were proposed, based on the two concepts of 'aviation' and 'Olympia'. After an initial selection, it was decided to focus on the variant known as 'condensation trails', in which shining stripes in the ceiling converge on a central light field over the entrance vestibules.

This theme was further developed by the asymmetric layout of the interior panelling, which allowed the light stripes to be complemented by recessed spotlights. Vertical stripes highlighted by LEDs are installed on the window pillars and the luggage racks to round off the lighting architecture.

The interior layout of the vehicles was a critical element in the overall design concept, and led to some intensive discussions. What were the main passenger flows? How much luggage would passengers have, and how should the seating be arranged to provide an optimum layout with sufficient space for both passengers and luggage? Is it possible to create a sufficiently flexible interior? During the design phase, we held a number of workshops with both operator and manufacturer in order to develop the layout and optimise the production process.

At the same time, the first drafts for the colours and materials for both the interior and exterior were developed, once again drawing on traditional, cultural and geographical aspects of Beijing. Among other things, this led to the selection of a classical red variant, as well as a two-colour scheme which reflects the influence of the capital's surrounding landscape.

Mock-ups and models of the shortlisted designs were produced for consulation with local politicians and other stakeholders, which led to the approval of three different colour schemes for the interiors. These have been applied across the fleet, with seven trains having a blue interior, two beige and one red.

The basic shape of the vehicle exterior was determined by CRC, but the choice of colour for the external livery was also subject to considerable discussion at many levels. All the parties involved worked intensively on producing a number of variants, but the final design follows fairly classical lines, with an emphasis on the streamlined car ends and a strong focus on the logos and ABC branding.

In the relatively short time since the trains were delivered to Beijing for test running ahead of the formal opening of the line, they have already generated considerable interest and the design concept has been generally warmly received.

I believe that the ABC experience shows how a strong focus on good design creates added value for the operator, which is becoming increasingly important for railways around the world, not least because the appearance of the trains reflects the operator's focus on the passengers.

Design differentiates the image of the operator and positions its products in a competitive market with other transport modes. A good layout and finish contributes to this image, not least by providing an environment with which the passengers will happily identify themselves.

Following the ABC contract, Tricon has won a number of other commissions in China and elsewhere. These include the overall image for metro lines 6, 8 and 9 in Shanghai, and the interior design for the new Bangkok Skytrain cars, which are also being supplied from Changchun.

We are working with CRC on various projects for main line trains, where design is already firmly established as a key element in vehicle development. This work includes the development of new designs of passenger coaches and sleeping cars to meet the future requirements of Chinese Railways' long-distance passenger market.

Increased passenger comfort is an important consideration which rail can use to build on its existing advantages over other modes. Giving passengers more freedom of movement at their seats, and through the train during their journey, including the possibility to visit the restaurant car, are simple examples which contribute to the overall on-board ambience.

Given China's geographical size and the length of inter-city journeys, the overnight train will continue to play an important role in CR's future service provision. Creating an attractive and open feel in the relatively confined space of a sleeping car compartment is a major challenge for designers. To this end, it is important to examine the whole journey experience in the smallest detail, in order to identify emerging passenger requirements. China is now reaching the level of sophistication that demands differentiated interiors for various classes of travel; potential design elements include a focus on peace and relaxation, better passenger information systems, real-time communications and on-board workspace.

Other inputs into the current design debate include the use of sustainable materials, the visual and sensory characteristics of different elements of the interior fittings, as well as the actual properties of the materials used.

With the support of good design, China's traditional mode of mass transport is being re-invented with modern infrastructure to become a symbol for cities and regions, which will contribute in the longer term to enhancing the image of the whole country.