At home with the High Speed 1 domestic stock 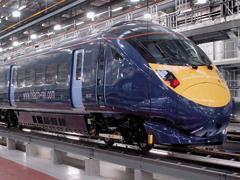 THE FLEET of Hitachi EMUs for UK domestic commuter services will be housed in a purpose-built depot at Ashford.

The £53m depot adjacent to the high speed line was officially opened by Japanese ambassador Yoshiji Nogami and UK Secretary of State for Transport Ruth Kelly on October 2, the same day as the inauguration of Temple Mills and shortly after the first of the Class 395s to arrive in Britain began tests on the main line.

Ashford depot was built by the Depco consortium of HSBC Rail, main contractor Fitzpatrick, architect RPS Burks Green, electrical contractor Emcor, track and OHLE contractor GrantRail, project manager Mace and law firm Norton Rose. It has a five-track maintenance shed, a double-road bogie drop pit and a heavy inspection road, as well as a washing plant and toilet-emptying facilities. The site is electrified at 750 V DC third rail, but also has a 25 kV test track for the multi-system EMUs. The tandem wheel lathe will undertake work for outside customers, and the depot site includes sidings which will be used to stable other Southeastern rolling stock.

Depco is also upgrading the existing depot at Ramsgate to provide overnight stabling and servicing for the Hitachi trains in addition to its work maintaining other Southeastern rolling stock.