ERTMS: the view from the cab 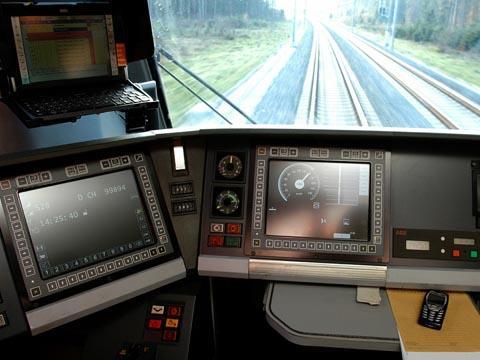 THE SIGNAL clears, the right-away indicator illuminates, and our driver applies power. The 11.00 inter-city service to Luzern starts to roll out of Bern Hauptbahnhof. With 12 Mk IV coaches behind Re 460 041, giving a total train weight of more than 600 tonnes, the acceleration is smooth and steady.

More than 250 trains a day are now using SBB's Mattstetten - Rothrist line and its branch to Solothurn, making this the busiest ETCS Level 2 installation in the world. In conjunction with the ERTMS conference in Bern (RG 10.07 p608), Alstom Schweiz arranged a cab ride over the line with Project Director Daniel Lüscher for me to see the equipment in operation.

The Re460s have two display screens in the cab — one ahead of the driver for the main Driver-Machine Interface and a second to the left. This is usually kept to control the GSM-R radio, but can act as a back-up DMI if needed. A separate display above the control desk provides working timetable information for the train, reducing the driver's reliance on printed documents.

Bern Hbf and its approaches are conventionally signalled, as indicated by a 'Level 0' icon on the DMI, below the speedometer display. As we thread through the crossovers at Wankdorf, another icon appears as the loco's on-board ERTMS makes contact with the Radio Block Centre at Olten. On ducking down into the lengthy Grauholtz tunnel, the icon changes to confirm that the GSM-R data handshake has been successfully completed.

At this stage we are still running on the lineside signals, but as we leave the tunnel and pass over the junction at Mattstetten, two prominent signs indicate the switch to cab signalling on the new line.

With Level 2 operation established, the driver receives advanced indications about the condition of the line ahead on the 'planning panel' which occupies the right-hand portion of the DMI screen. This shows the extent of the train's current movement authority and the braking curve needed to respect the target speeds.

In SBB's integrated Bahn 2000 timetable, four fast trains each way between Bern and Olten join the line at half-hourly intervals, running in 'flights' at 2 min headways. At the busiest times in each 30 min cycle, the RBC is dealing with 12 trains simultaneously, which Lüscher says is well within its 25-train capacity.

A through service from Genève Airport to Luzern, ours is the first of the flight, followed closely by the 11.02 to Zürich. The timetable is currently structured for 160 km/h, as the final clearance to run at 200 km/h was only received in July (RG 9.07 p524). With a clear road ahead, the line speed indicator on the DMI moves up to 200 km/h, and after a quick word with Lüscher the driver accelerates steadily.

As the needle reaches 201 km/h, the speedometer display changes from white to yellow indicating an overspeed; the driver eases back, but had the train accelerated to more than 215 km/h the display would turn red and an emergency brake application would be initiated. As this would bring the train to a mandatory stand, our driver is careful not to demonstrate!

The limit of our movement authority shown on the planning screen creeps closer and then jumps back as further sections are released by the RBC. We glide through the junction with the Solothurn branch at Wanzwil and continue smoothly around the curves near Langenthal.

Approaching Rothrist, we are running several minutes ahead of schedule. Bern - Luzern services must cross to the slow tracks here to reach the single-line Aarburg chord onto the Olten - Luzern line, and our speed drops to just 30 km/h. Lüscher explains that this is one of the pinch-points on the route. The Level 0 indicator comes up on the DMI, and after a final data handshake we log off from the RBC and revert to conventional signalling.

Yellow signals lead us off the main line and through the chord, after which a final sprint brings us to Zofingen. It is 11.31, and we are right on time.