Rapid liberalisation of Europe's rail sector, and an associated increase in cross-border operations, is challenging operators and suppliers to rethink locomotive design. The flexibility of the Traxx locomotive platform meets a wide range of requirements, and no fewer than 1 226 locomotives have been ordered to date 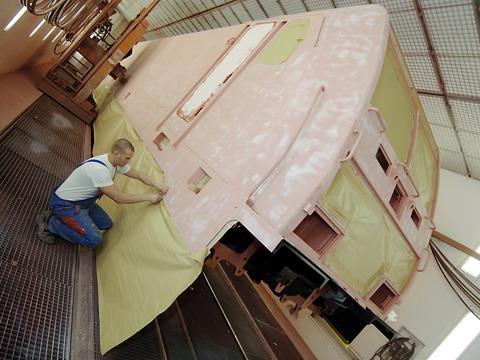 TRACTION engineers have dreamt for decades of a standard locomotive design that could haul trains across Europe's borders. The obstacles of different power supplies and train control systems have proved formidable, but the dream is at last coming close to reality.

The answer is not a single type of locomotive - which would be prohibitively complex and expensive - but a modular 'platform' from which an entire family of locomotives can be assembled using different combinations of major components. This is the concept on which the Traxx locomotives are based - and orders for 1 226 locomotives so far suggest that the operators' needs really are being met.

Commercial competition on Europe's rail networks has led to growth in cross-border activity, with open-access and national operators needing considerable flexibility in terms of traction. High service reliability and availability are essential for locomotives which are running on tight schedules in paths established and managed by the independent infrastructure managers. These requirements are accentuated when trains run across borders, possibly over very long distances and into countries where technical support may be less available and more costly.

At the same time the European Commission is pressing Europe's railways to standardise, so that in the long term a unified network will emerge, helping rail to compete effectively against road and air. From the suppliers' perspective, the objective is to cover many fragmented applications with standard Europe-wide products. Pragmatic solutions are necessary to integrate the diverse needs of operators, rail infrastructure owners and certification agencies, while meeting the latest standards and regulations.

Locomotive design is also influenced by geographical and technical requirements which include variations in maximum speed, power output, the use of diesel or electric traction, wheel arrangements, loading gauges (mostly within UIC 505-1), and maximum permissible axleloads. Furthermore, different catenary voltages have a strong impact on the design of power conversion equipment, the most common systems being 15 kV 16·7 Hz, 25 kV 50 Hz, 1·5 kV DC and 3 kV DC.

Historically, state railways have specified their own locomotives, predominantly from local manufacturers. With relatively large networks electrified using one voltage, a locomotive for a single system was justified. Such locomotives were designed and built, in Italy, for example, for operation solely at 3 kV DC, in Germany at 15 kV AC and in the Central and Eastern European countries at 25 kV AC.

With the advent of modern asynchronous traction motors, the difference between a locomotive for either 15 or 25 kV has become small, as, with the exception of some high-voltage equipment, the traction power converters are largely the same. A locomotive capable of running under both 15 and 25 kV AC catenary gives the operator the commercial advantage of being able to serve a much larger market, which justifies the slightly higher costs compared to a single-system locomotive. As a result, dual-voltage locomotives are now becoming the norm on Europe's AC networks.

The first dual-voltage Traxx locomotives were delivered in January 2000 to Railion, which designates them as BR185. These locomotives are designed to fit the narrower French loading gauge and can be used in all countries in mainland Europe where electrification is at 15 kV or 25 kV AC.

The BR185 has a long history. It is based on design principles going back to the BR101 passenger and BR145 freight locomotives for Deutsche Bahn - which was anxious to have as many common spare parts as possible. The eight-year span of deliveries allowed the locomotive to be updated as technical progress was made. For example, in early 2004 the GTO thyristor traction p ackage was replaced by IGBT equipment, the bodyshell was modified to meet the new EuroNorm for crashworthiness and a modular brake system was fitted, creating the 185.2 series. Also, new ETCS-based automatic train protection was introduced to facilitate subsequent migration and to permit the locomotives to switch between different national train protection systems without stopping.

Today, the BR185 is the major workhorse for cross-border operators on the north-south freight corridors. Most operate in Germany, Switzerland and Austria, but some are used on 25 kV AC networks, primarily in France and Luxembourg. Dual-voltage locomotives are equally suited to central European countries, and in 2007 they were used for the first time to haul freight between German ports and terminals in Hungary.

The 25 kV corridor through Denmark connects the 15 kV German network with the 15 kV railways in Sweden and Norway, making this route equally suitable for dual-voltage traction. The first contracts for a Nordic version of the BR185 were placed in 2007 by Hector Rail and Railion, and operations will start early in 2008.

Compared to the dual-voltage locomotive, it is technically more difficult to design a locomotive to operate under both 15 kV and 25 kV AC as well as 1·5 kV and 3 kV DC catenary. This is due to the high input voltage on the 3 kV DC catenary, with transients up to and exceeding 4 kV.

As it is not possible to transform the DC line voltage to lower voltages with passive components such as the main transformer on an AC locomotive, engineers have in the past resorted to complicated circuitry. With the availability of high-voltage, high-power IGBT semiconductor devices with a 6·5 kV blocking voltage, it is now possible to produce a cost-effective design. Hence multi-system locomotives with the ability to operate under both AC and DC power supplies are now readily available. Although they are about 18% more expensive than AC locomotives, they avoid a change of locomotive at the boundary between AC and DC catenaries.

The typical Bo-Bo configuration of European electric locomotives has proved to be the most cost-efficient for many freight and passenger services as it offers an optimal balance between tractive effort and weight. A single locomotive is able to cover most duties given that loads are generally determined by axleload and the maximum permitted train length. Where heavier loads are needed, two Bo-Bo locomotives are used in multiple, for example on the heavy trains that carry clay from Limburg in Germany, over the Lötschberg route in Switzerland to Italy. On this route the trains have to maintain a speed of 80 km/h on grades of 1·2%.

With the advent of liberalisation, it quickly became evident that dual-voltage and multi-system capability did not suffice to allow a locomotive to operate across borders. Train protection systems and other safety equipment must also be compatible, but as no central agency can certify locomotives for operation in different countries, certification must be obtained separately in each state. At present, the legacy ATP systems and certification processes remain huge challenges for suppliers of locomotives for cross-border services.

Given that ETCS will eventually become the future standard train protection system, the on-board equipment must be installed - or at least provision must be made for it. This led to a new concept using a standardised ETCS architecture. The first application was in January 2004 on Railion's BR185.2 locomotives. Integrating national ATP systems into the ETCS-based train protection reduces the volume of components and cuts overall costs. But the equipment must be able to handle the transition from one ATP system to another.

The first Traxx locomotives to feature ETCS Level 2 are the AC locomotives operating in Switzerland, and these are being followed by the Angel Trains Cargo and CBRail locomotives destined for operation through the Netherlands on the Betuwe Route and then through Germany into Switzerland and Italy.

In response to operator demands for maximum flexibility, Bombardier developed the Traxx locomotive platform. Derived from the BR185, this addresses the need for standardisation and modularity, to meet different operational and technical requirements. The needs of passenger and freight railways are met with four basic versions:

Traxx AC for 15 and 25 kV AC networks; this is the most widely-used version with 70 to 80 units delivered on average per annum;

Traxx MS (multi-system) for operation on both AC (15 and 25 kV) and DC (1·5 and 3 kV) networks; the Traxx MS is so far certified to operate in the Netherlands, Belgium, Germany, Switzerland, Italy, Austria and Poland;

Traxx DE is a diesel-electric locomotive which commenced operation with German operator LNVG.

All locos are assembled at Kassel in Germany, apart from the Traxx DC, which is built at Vado Ligure in Italy.

The Traxx locomotive platform is structured from building blocks comprising:

The different versions are assembled from various combinations of the building blocks so that a wide range of requirements can be met (Fig 1).

Benefits for operator and supplier

Numerous advantages accrue from the platform concept. First, the operator has a choice of locomotive within the same basic design. For cross-border services, he can choose a locomotive able to operate in more than one country - or he can acquire separate locos for different countries.

The entire family has a common technical base which yields advantages in terms of training drivers, service and maintenance personnel, even if the operator has a mixed fleet. Procurement of spare parts is simplified, and workshops and depots can use common equipment. Similar advantages can be obtained with train operations and planning.

All Traxx electric locomotives have train heating equipment based on UIC standards and can therefore be used for passenger or freight trains. Diesel versions feature train heating as a standard option.

Should market needs change, it is relatively simple to reconfigure locomotives for use in different corridors, and a DC locomotive can be upgraded to multi-system. At the same time, service-proven components and systems ensure high levels of reliability and availability.

Locomotives derived from a product platform can be developed and assembled in less time than custom-designed locomotives, allowing the operators to react quickly to changing market needs.

The benefits for the manufacturer include standardised production technology and parts logistics, reducing assembly time and improving quality.

For the first time in the locomotive industry, the layout and bodyshell of the electric and diesel versions are the same, differences being confined to the power conversion and generating equipment. Compared to previous designs, the power conversion equipment in the electric locomotives is integrated into a central E-PowerPackage (Fig 2), containing, on one side, the high-voltage equipment such as circuit-breakers and earthing switches, input filters and power switches for train heating, and on the other, two independent traction converters for each bogie. The transformer needed for AC operation is mounted in the underframe, and in the DC versions, the transformer is replaced by a tank containing the 3 kV DC input chokes. Both have the same mechanical interfaces to the body. Placed in the centre of the locomotive, the E-PowerPackage reduces cabling and allows a higher degree of pre-testing before final assembly.

In the diesel-electric Traxx, the E-PowerPackage is replaced by a D-PowerPackage consisting of the diesel engine and generator. The fuel tank fits in the space occupied by the transformer and has the same mounting interfaces as the electric locomotives.

The high level of standardisation is illustrated by comparing the percentage of parts that are common to the present Traxx AC series:

As procurement managers and engineers contemplate the options for replacing aging traction fleets, in Central and Eastern Europe for example, the benefits of a proven product platform can be seen where Traxx locomotives are operating on routes right across Western Europe. While the capital cost of a new fleet may be higher than keeping old locos in service, lower maintenance costs, lower energy consumption and higher asset utilisation promise economic advantages.