Winning the RCF battle on the production line 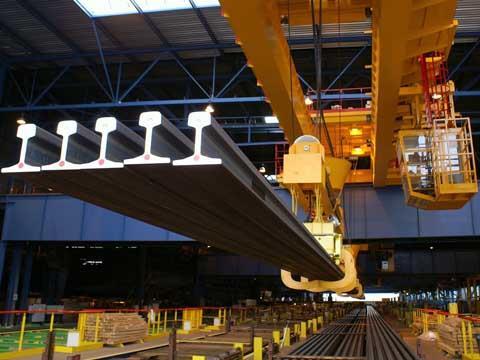 Efforts to improve rail life have been successful in addressing most of the traditional rail failure mechanisms, even though new phenomena frequently come to light after other problems have been solved. Today, commercial pressures are leading many railway operators to increase the whole-life duty seen by rails, which in turn is presenting a new set of challenges for metallurgists to consider.

For many years, service life was determined by rail head wear and metallurgical fatigue defects inside the head. More recently, rolling contact fatigue has risen to the top of the list of problems to be solved. Metallurgists and engineers are channelling their energies into developing a comprehensive understanding of rail degradation.

Best-practice steelmaking has played a significant part in eliminating internal fatigue cracking of rail. Before the development of the modern rail steel manufacturing process, steel had the potential for hydrogen cracks or non-metallic inclusions. These weaknesses, which were common before the 1980s, acted as initiation sites from where fatigue cracks could develop inside the rail. Improvements in steelmaking and non-destructive inspection during manufacture ensure that such weaknesses are no longer found in new rails.

A steel weakness can act as a stress raiser and initiate internal fatigue. A small crack can grow into a tache ovale through cyclic loading as traffic passes. The tache ovale will grow until it reaches the rail surface, joins a network of other subsurface cracks and causes spalling, or it turns down and causes a transverse break.

Gauge corner shelling appears in curves on lines where trains operate at speeds between 50 km/h and 100 km/h, axleloads are high and wheel flanges exert high impact forces on the gauge corner of the outer rails. De-cohesion of the steel occurs some 10mm under the rail corner in the form of stairs and risers, while the presence of inclusions also plays a significant role. Longitudinal flakes then come loose and, in some cases, the defect can develop into a transverse crack, resulting in a rail break.

In order to avoid these defects and to ensure good service properties, Corus now produces its rail steels using blast furnace pig iron. This ensures that the steel has a very low content of metallic and non-metallic residual elements. Secondary steelmaking ensures tight control of the chemical composition of every cast.

Vacuum degassing treatment in an RH steel re-circulating degasser allows efficient reduction of hydrogen content and a continuous casting process to minimise steel segregation. After rolling, in-line ultrasonic equipment is used to inspect more than 80% of the vertical section of the head and of the rail web and the central part of the foot. This ensures that any defects within the rail will be detected and eliminated.

Rail wear was initially addressed by introducing a range of harder steels with much improved wear resistance. Today rails can be produced in any hardness from 220 to 400 Brinell hardness, the hardest rail having five times the wear resistance of the softest grade.

Under normal conditions, wear resistance of steels increases with hardness and is therefore governed by carbon content and the presence of other alloying elements. Higher carbon content and alloying elements decrease the pearlitic interlamellar spacing, which raises the hardness. Hardness can also be improved by heat treatment; Corus remains in the forefront of the development of high-hardness steels, delivering 50 000 tonnes a year of heat-treated rails in the range from 350 to 420 BnH.

Robust solutions are now available for traditional life-constraining attributes, but faster trains, heavier axleloads and higher annual tonnages are raising the demands placed on rails. New rolling stock can also be more aggressive at the wheel/rail interface. It is inevitable that rails will degrade and eventually be replaced or fail, yet infrastructure managers want their rails to last longer.

In recent years, the fastest growing cause of rail replacement across Europe has been rolling contact fatigue. RCF is the result of contact forces on the rail exceeding the shakedown limit of the steel, which work hardens and loses its pearlitic structure.Repetitive cracks then initiate along the rail surface. In some cases these minute cracks wear away as the exhausted surface layers peel away, but in other cases the cracks grow into the rail head at a shallow angle and develop a size and shape that is internally similar to a tache ovale. When the cracks reach a depth of between 5 and 7 mm, some branch down and cause vertical fractures. Others turn back up to the surface and join with adjacent cracks, leading to spalling of the running surface. Either of these outcomes necessitates immediate replacement.

Corus metallurgists and track designers have increasingly turned their attention to RCF, investigating the phenomenon and examining how different grades of steel can play a role in fighting it. An extensive test programme in conjunction with several European rail networks has enabled the company to compare a wide range of standard and new rail grades in live track situations, both on straight track and in curves of different radii. The results have provided useful leads towards increasing the service life of rails and the reduction of total life costs.

Producing excellent results on curved track during RCF field trials in France and the Netherlands, MHH rail is composed of heat-treated micro-alloyed steel produced at the Corus plant in Hayange, France. After being cooled naturally, MHH rails are straightened in both planes of symmetry using rollers. They are then heated in-line to the transformation temperature using a series of heating inductors.

The rails are then cooled on all sides using compressed air in a precisely-controlled process to produce the required hardness and maintain a consistent shape. Thus the rails do not require further straightening with rollers, and present a very favourable residual stress pattern compared to conventionally-produced rails. The microstructure obtained on all treated rails is 100% ultra-fine pearlite with no transition zone.

Originally developed to reduce wear and plastic flow under axleloads as high as 35 tonnes, MHH rail has proven its ability to outperform other commercial grades in its resistance to RCF. It is thought that these benefits arise from its hardness, which delays the crack initiation process, its elongation properties and cross-section reduction properties which slow down the early stages of crack development. Its favourable residual stress reduces the risk of cracks turning down and the risk of fatigue foot failure. MHH is not a cure for RCF, but in combination with a comprehensive track maintenance programme and occasional grinding, it can significantly extend the life expectancy of the rail in the most arduous conditions.

Working with SNCF, in October 1993 Corus installed various grades of rail steel on a test section of the Paris - Strasbourg main line where squat-type RCF damage was particularly developed. On-site tests and laboratory examination of track samples yielded useful information regarding the performance of the various rail grades and the role of preventive grinding.

This was followed in 1997 by a study concentrating on head checking, where only the high rails of the curve at St-Benoît near Poitiers were replaced with different grades. The main aim was to quantify the reputable beneficial effect of wear on RCF by eliminating surface layers where cracks are initiated due to repeated load cycles. To this end, a range of grades was used, from the 800 grade widely used on urban networks to MHH rail.

The test section was installed in March 1997 and preventive grinding was carried out on the entire curve in October that year. By February 2004, traffic using this section of line had reached a total of 119million gross tonnes.

Rail profile measurement was undertaken at the same locations during each inspection, confirming that the rate of lateral wear was determined by the position of the rail in the test area, maximum values occurring in the middle of the curve. It was also found that the rate of lateral wear had stabilised, and that there was practically no wear on the MHH rail. Grade 800 rail was found to wear 35% more quickly than grade 900A, while MHH wore four times more slowly than grade 900.

Today, the 800 grade rail on the test site has already reached its wear limit. In contrast, the MHH rail still bears residual marks from the preventive grinding and has produced the best results both in terms of wear and RCF resistance.

MHH rail was subsequently installed at a similar test site near Utrecht on the ProRail network in the Netherlands, where 260Mn grade rail provided the reference. After 57million gross tonnes, the results were similar to those obtained at St-Benoît. The hardness of the MHH and 260Mn rail stabilised at 435HV and 350HV respectively after a stage of constant increase, and the MHH rail demonstrated far better resistance to the propagation of head checks.

ProRail has already decided to extend the experiment by approving MHH for general use on the Dutch network. The infrastructure authority has recommended that it should be used on the high rail in curves with a radius between 750m and 3000m where the daily load is 5000 tonnes and above.