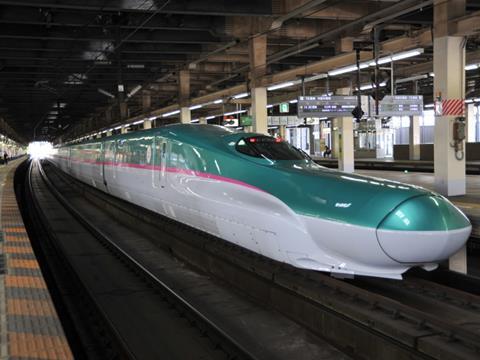 INDIA: A 10-car variant of JR East’s Series E5 Shinkansen trainset has been selected to operate the country’s first high speed line between Mumbai and Ahmedabad, according to the Ministry of Railways. Indian Railways is expected to order an initial build of 25 trains at an estimated cost Rs50bn.

Construction of the 508 km line is due to get underway in 2018, following a groundbreaking ceremony which is expected to take place during a visit by Japanese Prime Minister Shinzo Abe later this year. Completion is envisaged for 2023. Geological surveys began in February, following the signing last December of an accord between the government, the National High Speed Rail Corp and Japan International Co-operation Agency.

Most of the 1 435 mm gauge line would be elevated, apart from a 21 km underground section north of Mumbai including a 7 km undersea tunnel. There would be 11 stations, of which four would be located in Maharashtra and seven in Gujurat.

Each trainset would have 698 seats for standard class passengers and 55 seats for business class. There would be two wheelchair-accessible toilets and separate facilities for men and women in alternate vehicles. Baby changing facilities are also to be provided.

Operating at a maximum speed of 350 km/h, ‘rapid’ trains are expected to link Mumbai and Ahmedabad in 2 h 7 min, with two stops at Surat and Vadodara. Stopping services calling at all stations are expected to take 2 h 58 min. IR is planning to run 35 services each way per day, with two per hour off peak and three in the peaks; the line is forecast to carry around 36 000 passengers/day in the first year.

Total cost of the project is put at Rs1 070bn, of which 81% will be funded by JICA through a 50-year low-interest loan. The local contribution will be channelled through NHSRC, which is a special purpose vehicle owned 50% by IR and 25% each by the two state governments. IR has already contributed Rs20bn to cover preliminary works, and earlier this year the national government signed an MoU with Gujurat releasing Rs770m for its share.