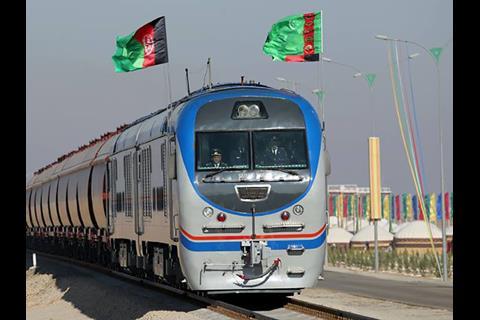 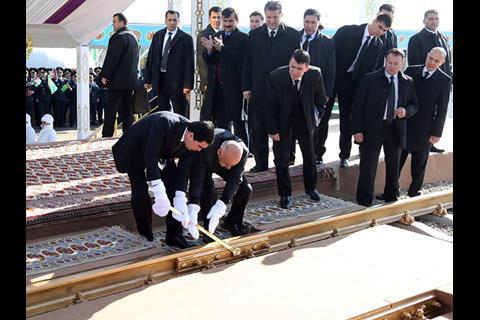 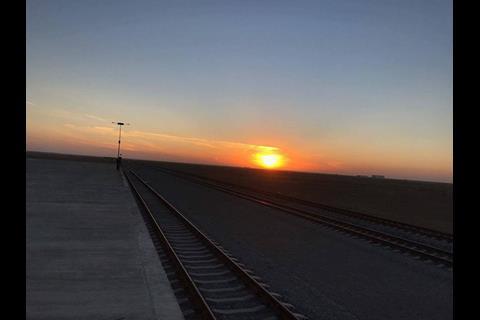 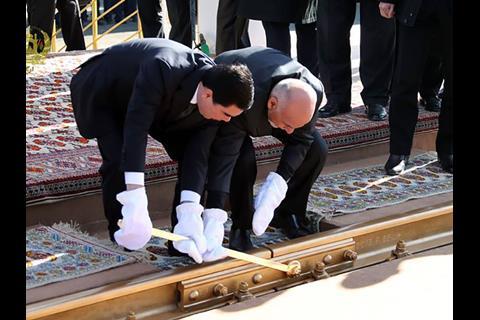 The 1 520 mm gauge line forms the Afghan end of the Lapis Lazuli Corridor which is being developed to improve freight links from Central Asia across the Caspian Sea to the Caucasus, Turkey and Europe.

The first freight train on the new line comprised 46 wagons carrying flour, grain, cement, urea and sulphur. There is a fuel terminal near the border, and Turkmenistan anticipates that the line will carry exports to Afghanistan which currently go by lorry including oil and gas, cement, grain and transit traffic including humanitarian freight. Afghan exports include fruit.

Initial discussions for the railway project began in 2008, and a framework agreement was signed when Afghanistan’s then President Hamid Karzai visited Ashgabat in May 2011.

Afghanistan lacks indigenous capabilities for railway construction, and Turkmenistan agreed to take on responsibility for surveying, designing and constructing the entire route, with the section within Afghanistan to be considered as a donation to the country.

Construction was launched by the presidents of Turkmenistan, Afghanistan and Tajikistan with an elaborate ceremony in Atamyrat on June 5 2013.

The civil works were undertaken by staff from construction train No 2 from Amyderya, with the track laid by staff from Mary. The formation has been raised several metres above surrounding ground to protect the line from flooding, and shrubs planted to mitigate the effects of drifting sand. Two bridges were built in co-operation with Ukrainian company Altcom, one 256 m long at 15 Years of Independence Lake and one 363 m long over the River Karakum. A ceremony at Akina on October 30 marked the laying of the final rails.

A planned continuation of the line would extend it 35 km to Andkhoy, the first significant town in Afghanistan. The line also forms the first section of the proposed TAT Railway corridor from Turkmenistan via northern Afghanistan to Tajikistan. In the longer term this could link up with other projects to provide a route between China and Iran.

The new line is the second cross-border railway between Turkmenistan and Afghanistan, after a short Soviet-built line to a freight terminal at Towraghondi north of Herat. There is also a line from Uzbekistan to Mazar-i-Sharif, and construction of an Iranian-backed 1 435 mm gauge line to Herat is underway. Pakistan is undertaking studies for long-planned extensions of its network from Chaman to Spin Boldak and for a line from Torkham to Jalalabad.