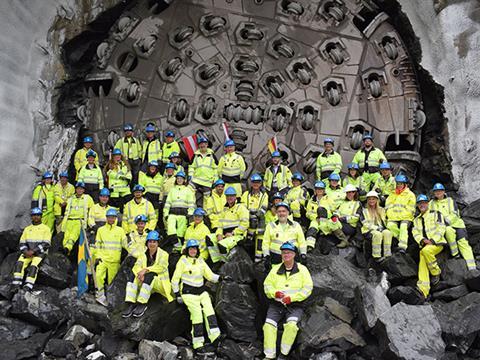 NORWAY: A ceremony in the suburb of Fløen on August 29 marked the breakthrough of the 7·8 km Ulriken tunnel, which construction authority Bane NOR claims is the first main line railway tunnel in the country to be bored by tunnel boring machine.

The bore will complement an existing single track tunnel, and it is expected to see its first trains in 2020. Excavation began in the town of Arna in January 2016, and the next step in the construction phase requires the boring of 16 cross-passages to link the new alignment with the existing tunnel, Bane NOR says.

‘This is a joyful day for us in Bane NOR. Today's tunnel from 1964 is a bottleneck, and with the new tunnel we get doubled capacity. This will give both passengers and freight traffic a lot better conditions’, said Helga Nes, Head of Development at Bane NOR.

The tunnel work is part of a wider upgrading programme worth NKr22bn on the Oslo – Bergen corridor being co-ordinated by infrastructure manager Jernbaneverket. This includes construction of a 69 km double-track alignment between Voss and Arna.