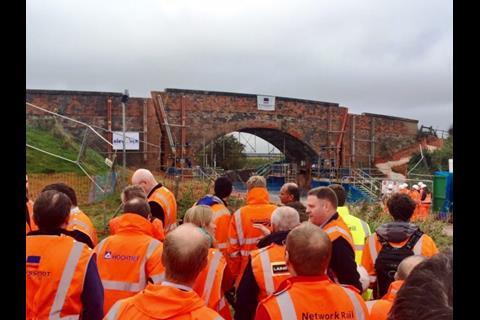 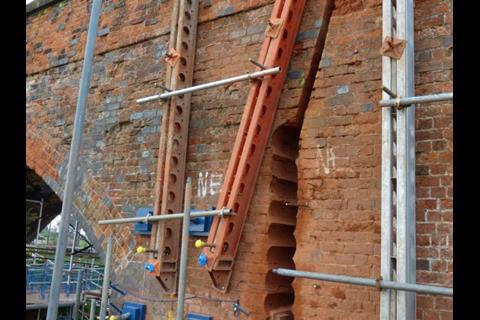 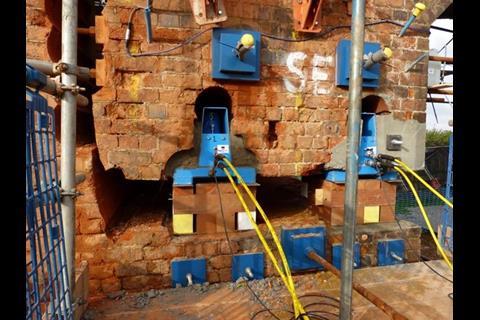 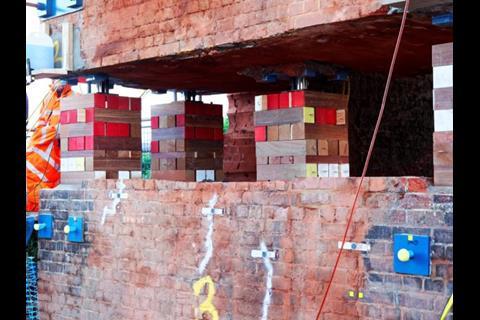 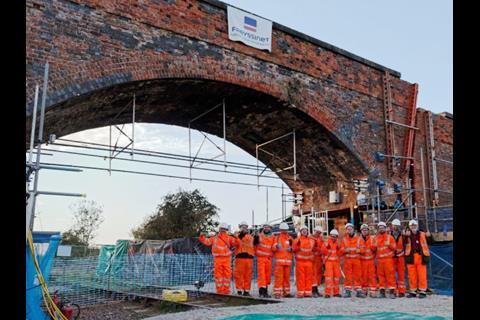 UK: An innovative process to raise arched masonry bridges to increase clearances for electrification was successfully demonstrated in Buckinghamshire on October 26.

The ElevArch technique has been developed by Freyssinet under the RSSB-sponsored ‘Avoidance of Bridge Reconstruction’ competition. This was launched in 2014 to find cost-effective ways of increasing clearances under fixed structures to accommodate overhead electrification. According to the safety and standards body, around 500 masonry arch bridges in the UK need to be raised or rebuilt as part of Network Rail’s electrification programme.

Working with masonry arch expert Bill Harvey, Freyssinet explored the feasibility of vertically jacking the bridge arches. ElevArch was one of four approaches to be shortlisted last year for a full-scale demonstration phase. The 161 year old Moco Farm bridge carrying a farm access road over the Bicester – Bletchley line, which is now being recommissioned under East-West Rail Phase 2, was selected for the trial.

The patented technique involves cutting the arch free from its abutments and wing walls so it can be jacked up to increase clearances. According to Freyssinet, ‘the sequence of operations is key to maintaining the all-important thrust line’. A horizontal saw cut is made through each abutment, just below the arch springing, and five holes cored horizontally into each abutment. Vertical lifting jacks are inserted into the holes to support the weight of the bridge.

The horizontal component of the thrust force is taken by four vertical slip bearings which are inserted into slots cored through the four wing walls. These bearings prevent the arch from spreading horizontally whilst allowing vertical movement. Once they have been grouted in place, the rest of the wing walls are cut through with a wire saw to release the arch from the foundations.

The 50 tonne capacity jacks are computer-controlled from a central unit to an accuracy better than 0·1 mm, guaranteeing a fully balanced, synchronous lift.

On October 26, the 220 tonne masonry arch bridge at Moco Farm was jacked up by 900 mm over a 6 h period. The arch was then lowered by 465 mm into its new position to avoid the need for reprofiling the approach ramps. This gave a net lift of 435 mm. The resulting gap in the abutment will be faced with brickwork and back-filled with concrete.

Whereas a full bridge reconstruction or track lowering can require the railway to be closed for several days, Freyssinet believes that ElevArch could reduce this to a matter of hours, with many of the preparatory and completion tasks taking place behind protective barriers while the line is operational.